China’s official roadmap for building a hydrogen economy adopts a pattern of slow and steady development, with a handful of modest numerical targets but a focus on innovation and localising technology to sharpen industry knowhow.

The medium to long-term hydrogen development plan covering 2021-2035, jointly released by the National Development and Reform Commission (NDRC) and National Energy Administration (NEA) in March, sets out high-level guidance for China’s hydrogen supply chain over the next dozen years.

After much hype on China’s hydrogen development after president Xi Jinping’s net-zero pledge in 2020, the plan is the first to be released by Beijing at a national policy level and underscores the growing importance of hydrogen in its long-term decarbonisation plans.

While the roadmap’s few quantitative targets are modest, the document spells out how hydrogen will be encouraged and developed in target applications across transport, industry, power generation and energy storage. There is also the expectation that more detailed quantitative targets will be released over time based on industry development.

The plan’s key message is that hydrogen will be an important part of China’s overall energy mix in the long term, playing an important role in helping the country achieve its “dual carbon” targets of peaking emissions before 2030 and then zeroing them out by 2060.

The policy focus is on technology and innovation, with a target to develop the industry in a sustainable manner. This speaks to China’s challenge in developing a hydrogen economy. As a global leader in renewable energy with investment of $266bn last year, China is in an advantageous position to adopt green hydrogen as a key component of the energy transition.

In terms of technology though, China is still behind in many parts of the hydrogen supply chain – especially in more advanced fuel cell technology and key components, such as the proton exchange membrane (PEM) and catalysts.

The policy document is therefore more aimed at addressing technological shortcomings than scaling up, and will benefit market leaders within each category across the supply chain.

The headline numeric target is that China – already the world’s biggest hydrogen producer – should produce 100,000-200,000 metric tons per year of green hydrogen via electrolysis using renewable energy by 2025. The bottom end of this range would be more than triple the 30,000 tons produced worldwide via water electrolysis in 2020, as estimated by the International Energy Agency. The document did not set a target for China’s total hydrogen output by 2025.

The specific target for green hydrogen output hints strongly that output from renewables will be the key focus of hydrogen production, with deployment in facilities near production centres to be encouraged while production from fossil fuels is expected to be discouraged.

China produces some 33mn mt/yr of hydrogen mostly from fossil fuels, according to state-backed industry association the China Hydrogen Alliance (CHA). Coal contributes 63.5% of supply while 21.2% is industrial byproduct and 13.8% comes from natural gas. Just 1.5% comes from water electrolysis that is not completely powered by renewables.

By 2025, material progress should be made in clean energy hydrogen production technology, and a hydrogen energy supply system centred on industrial byproduct hydrogen and local utilisation of green hydrogen produced from renewable energy sources should have been established. 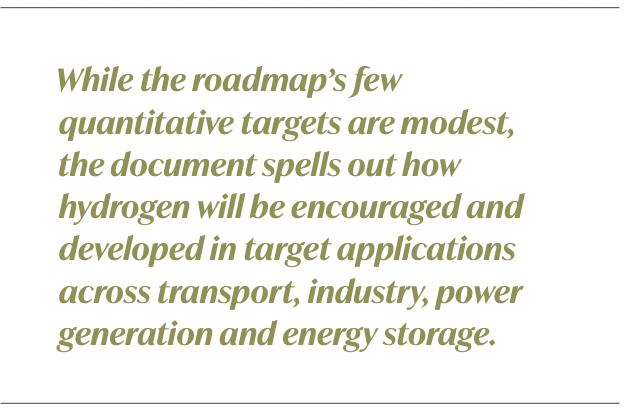 Hydrogen produced as a byproduct of petrochemical or refining hubs should be prioritised and encouraged for local consumption, to reduce the cost of supply. This preference may raise eyebrows, but appeals to Beijing because it would alleviate high import dependency on crude oil, gas and LNG. This aligns with China’s obsession with energy security under president Xi’s administration, which has climbed up the policy agenda amid geopolitical tension and trade friction globally.

For wind power-derived hydrogen, the most applicable markets would be Inner Mongolia, Gansu province and Ningxia in northern China – which have plentiful onshore capacity – and Guangdong and Fujian provinces on the southeastern seaboard that boast abundant offshore resources.

Storage potential to be explored

Alongside transport, industry and power generation, the inclusion of energy storage as a potential application area stands out as it follows recent rising interest worldwide in hydrogen’s suitability for long duration, large-scale storage given its high energy density. The near and long-term aims are to improve the efficiency of high-pressure hydrogen storage, reduce related costs, and accelerate the pace of commercialisation progress.

As part of these ambitions, the use of cryogenic liquid hydrogen storage and transportation will be promoted, while alternative storage technologies will be explored and demonstration projects on pipeline transportation infrastructure will be carried out.

All in all, the sense is that Beijing expects China to have a relatively complete hydrogen industry development system by 2025, with significantly improved innovation capability and basic mastery of core technologies and manufacturing processes.

By 2030 the aim is to build a relatively complete supply chain for the hydrogen industry – including production, transmission and storage – and for green hydrogen from renewables to be deployed widely.

Looking further ahead, the plan envisions a more entrenched industry. By 2035 China wants to have a full hydrogen ecosystem relying more and more on clean production to help fuel transportation, energy storage and industrial facilities.

The share of green hydrogen in the Chinese energy mix will be significant and an important part of decarbonisation – summed up by the plan’s call for hydrogen to be “an important backbone for the nation’s energy transition” by 2035.

Much of the plan emphasises domestic technological innovation, and to develop the hydrogen economy in a sustainable manner. The focus is to improve the industry technology, build research and development talent – particularly for PEM fuel cells and electrolysers. The targets include improving the performance and durability of fuel cells and lifting the efficiency of electrolysers.

At the same time it is clear from the plan that China is keen to avoid overbuilding in the nascent sector as overcapacity plagues numerous domestic industries, from steelmaking and cement to aluminium and coal. The plan said hydrogen projects should be pursued rationally on the basis of resources and market demand to avoid disorderly competition.

“Local government will be strictly forbidden from blindly following the trend of hydrogen project construction and will be prevented from building low-end projects in order to avoid wasting resources,” said Wang Xiang, deputy director of the NDRC’s high technology department, at a press conference for the plan in March.

This year 18 of mainland China’s 31 provincial-level authorities included hydrogen in their annual government work reports, up from 13 last year. The provinces of Hebei, Henan, Jilin and Shanxi have mentioned the energy resource in their reports for the past four consecutive years, while five new provinces including Jiangsu and Hubei proposed development for the first time.

Other quantitative targets in the new hydrogen plan include utilising hydrogen to cut China’s carbon emissions by 1-2mn mt/yr by 2025, although this is a fraction of the 11.9bn mt that the IEA estimates was emitted by the country last year.

“Development of hydrogen is an important move for energy transition and a great support for China’s carbon peak and carbon neutrality goals,” said Wang. “The premise of hydrogen industry development is not to incur additional carbon emissions,” Wang added.

Central authorities also plan to have 50,000 hydrogen fuel cell electric vehicles (FCEVs) on China’s roads by 2025 and will build a number of hydrogen refuelling stations. Extensive infrastructure buildout will be required to enable this – to this end, the plan calls for constructing a hydrogen refuelling station network in tandem with demand and the overall development of the hydrogen economy, which will be supported by leveraging China’s existing network of petrol stations.

An additional area of interest is exploring a business model of equipping hydrogen refuelling stations with on-site hydrogen production and storage.

China produced 356 FCEVs in the first two months of this year, up by 500% from a year earlier, according to the China Association of Automobile Manufacturers (CAAM). Production reached 2,000 vehicles last year, up by 48.7% from 2020. FCEVs are grouped together with battery electric vehicles and plug-in hybrids in China as new energy vehicles, sales of which are estimated by CAAM to reach 5mn this year.

China had built 255 hydrogen refuelling stations by the end of last year, equivalent to nearly

Industry insiders anticipate heavy-duty trucks to witness the biggest growth potential in China’s FCEV market. Heavy-duty trucks powered by fuel cells could reach parity with their diesel counterparts on total cost of ownership by 2024, according to an analysis by Credit Suisse last year – an inflection point similar to what battery EVs experienced in 2015.

This would be driven by lower energy cost and a favourable subsidy scheme geared towards FCEV heavy-duty trucks. On the supply side, the cost of hydrogen at the pump could be competitive against diesel at $60/bbl oil, thanks to lower distribution costs as China continues to build out its refuelling station network over the next few years. This would offer fleet operators a more compelling case to switch to FCEVs.