Bangladesh produces gas from 20 onshore fields, with output reaching an all-time high of 1 trillion ft3 (28.7bn m3) in 2019. However, production started to decline this year and by early September was about 2.5mn ft3/d according to the state energy company Petrobangla. 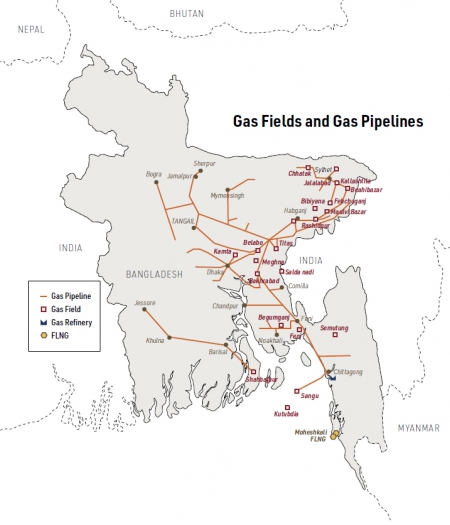 It appears likely to fall much further since most fields are depleting fast. Bangladesh’s reserve to production ratio was only 4.2 years in 2019, according to the BP Statistical Review of World Energy 2020. The government projects that by 2030 output from proved reserves will have fallen to 298.13bn ft3/yr.

The focus is now on offshore resources, with areas of the Bay of Bengal appearing highly prospective. However, little exploration activity has taken place, with offshore production unlikely to begin until well into the second half of the decade.

Plans for an already-delayed tender were shelved indefinitely in September because of the Covid-19 pandemic, according to local media reports. Production-sharing contracts now appear unlikely to be signed before 2022.

The decline in domestic gas production puts the onus on imports. Piped supplies from Myanmar and from or through India have been mooted for years, but projects have made little progress.

The replacement of gas from depleted fields and to meet growth will thus rely on LNG. Supplies began in August 2018 when US company Excelerate Energy commissioned a 3.75mn mt/yr (500mn ft3/d) Floating Storage and Regasification Unit (FSRU) at Moheshkhali Island. 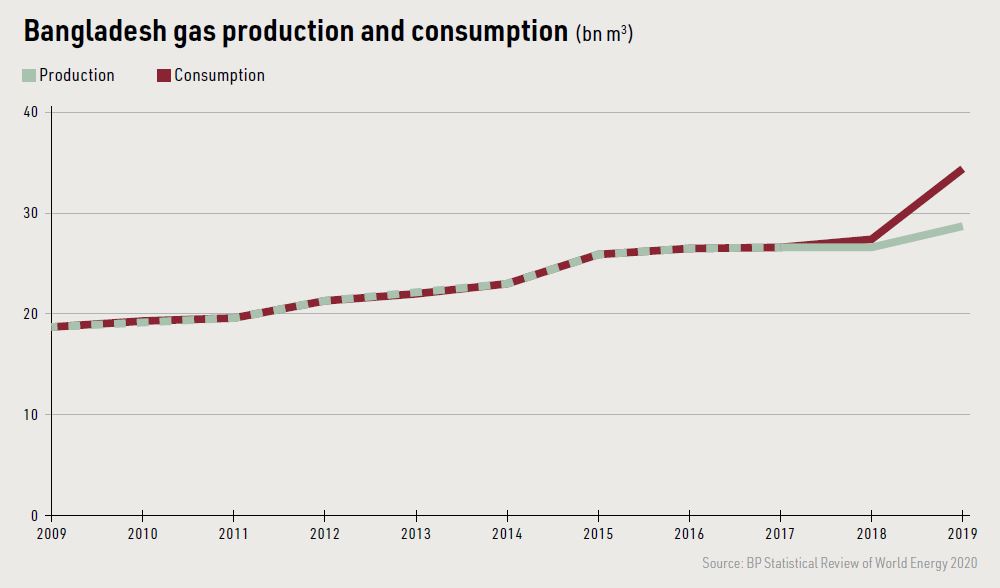 A second 3.75mn mt/year FSRU was commissioned by the local Summit LNG Terminal Co. Ltd at Moheshkhali in April 2019. Together, the two FSRUs accounted for almost 20% of total gas supplies by early September, according to data from state oil and gas company Petrobangla.

Gas accounted for 70% of Bangladesh’s commercial primary energy supply in 2019, according to BP’s data. Most is used for power generation -- 57% in financial year 2017-18, according to Petrobangla -- with 17% going to industry and 16% to residential users.

However, some analysts have warned the increase is unnecessary. In May 2020, the Institute of Energy Economics and Financial Analysis (IEEFA) claimed the PSMP capacity, which also envisages 17.533 GW of new coal plant -- would result in substantial overcapacity by 2030.

IEEFA said the PSMP plant could potentially generate 280.5 TWh in  financial year 2029-30, including 148 TWh of gas-fired output. But, it added, only 177 TWh would be needed, based on GDP growth of 7%/year and an electricity demand multiplier of 1.5.

In fact Bangladesh already has a high reserve margin. The 20.8 GW of installed capacity in September 2020 is well above the highest demand recorded to date – 12.9 GW in May 2019.

There are also questions about whether consumption would disappear, if subsidised tariffs ended. However, there is also a counter argument that power use could grow even faster than in recent years, if suppressed demand were released by installing more transmission and distribution capacity, investment in which has lagged behind generation. 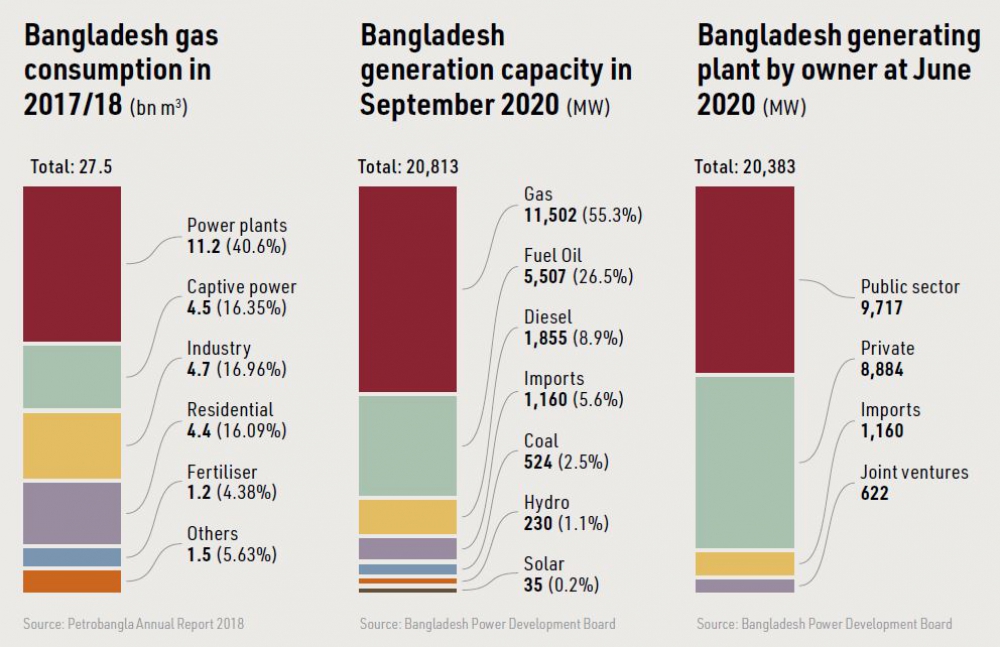 There are no such questions about the impact of Covid-19 on power demand. The lockdown imposed in March 2020 has severely dented previously robust growth in the sector. Lower industrial and commercial power use was only partly offset by increased residential demand. As a result, maximum generation fell significantly year on year each month during the second quarter, according to state power company BPDB. 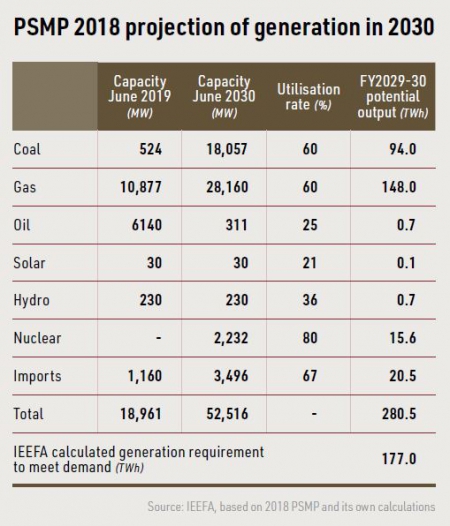 While economic recovery may be slower and more halting than the government expects, an uptick appears likely in 2021, resulting in strong power demand growth. Gas-fired generation appears likely to satisfy much of the new demand.

Coal out of favour

This is because the government appears increasingly disenchanted with coal, which was a main pillar of the PSMP. This envisaged that 22.59 GW of additional coal capacity would be required between 2020 and 2041, with 14.53 GW needed even in the low demand scenario.

However, coal-fired plants are relatively expensive in terms of capital cost, and – unlike gas -- would almost certainly always rely on imported fuel given Bangladesh’s largely undeveloped coal resources.

In July, energy minister Nasrul Hamid was quoted by local media as saying all new coal-fired projects are under review. He noted that only the 5 GW of capacity under construction at Rampal, Matarbari and Payra was certain to be implemented.

There are few options to replace the planned increase in coal-fired generation capacity.  Renewable energy is being pushed by the government and could grow substantially, but land availability is a significant issue for solar in particular. In addition, while 2.16 GW of nuclear plant at Rooppur is due to enter operation from 2024, it may not be followed by other reactors. 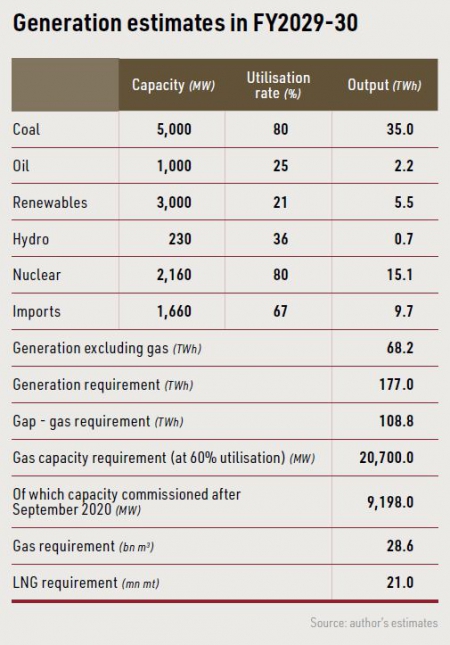 Power is imported from India through two links with 1.16 GW of capacity, and more could be added. But there are concerns about relying too heavily on India, with Nepalese imports seen as an alternative. The initial project would involve a 0.5 GW hydropower project, but this has made limited progress.

If planned coal-fired capacity is slashed as suggested, much of the additional generating capacity and output would thus have to be gas-fired. Even if electricity demand grows more slowly than officially expected, a substantial amount would still be required.

Assessing how much is the big question. The assessment made here assumes gas meets all generating requirements not provided by other fuels. It adopts IEEFA’s projected generation requirements of 177 TWh in financial year 2029-30, but uses a different fuel mix and, in some cases, different plant utilisation rates.

Gas demand from other markets, including fertiliser, manufacturing, and the residential sector will also see substantial growth from the 417bn ft3 these sectors used in total in 2017-18. A doubling of consumption in these markets to 833bn ft3 would take overall gas demand to 1.86 trillion ft3/yr.

With domestic production in 2030 projected at only 293bn ft3 that leaves 1.564 trillion ft3 to be met by imports. This equates to an LNG requirement of 32.6mn mt unless piped imports commence in the meantime.

Against this background gas-fired generator and LNG terminal projects are moving forward. Leading the charge on the power front is a 745-MW LNG-fired, combined-cycle project at Meghnaghat which secured finance in late July. The project is being developed by a 51:49 venture comprising India’s Reliance Power and Japan’s JERA (a joint venture between Tokyo Electric and Chubu Electric).

The project secured $642 million of debt from a Japanese consortium led by the Japan Bank for International Cooperation, with Nippon Export and Investment Insurance providing cover for the consortium’s commercial lenders. The ADB also extended $200 million to the project.

The plant is scheduled to enter operation in 2022, with the electricity being sold to BPDB under a 22-year agreement and gas supplied under a back-to-back agreement by Titas Gas, a subsidiary of Petrobangla.

Other gas-fired projects have also secured finance. For instance, Summit Meghnaghat-II Power Ltd’s 583-MW LNG-fired project at Meghnaghat secured $350 million of debt in 2019 from a syndicate including Standard Chartered Bank and the International Finance Corporation. It is being built by a venture between Summit and GE Capital.

With the pipeline of gas-fired generating projects moving forward, there is renewed impetus to build LNG terminals to supply them with fuel. Some of this could eventually come from dedicated facilities. Petrobangla and Reliance Power at one stage planned to build a 3.75mn mt/year terminal at Kutubdia to fuel the Reliance-JERA project.

However, the emphasis currently remains on the monopoly sale of gas to Petrobangla for onward sale to the wider market. In September, Petrobangla selected Japan’s Tokyo Gas to consult on the tender for a 7.5mn mt/year terminal at Matarbari. It will be built under a 20-year build, own, operate and transfer contract, with over a dozen companies having expressed interest.

With LNG demand set to grow, and its players becoming more experienced in the market, Bangladesh’s purchasing policies are evolving. All LNG was initially bought under long-term contract -- a 15-year deal with Qatar was signed in 2017 for 2.5mn mt/year, followed by a 10-year contract signed in 2019 with Oman Trading International. However, September saw the first contract for a spot LNG cargo awarded to Singapore’s Vitol Asia.

Investment in Bangladesh has often been regarded as high risk, with project approval and implementation being notoriously slow and prone to shifting rules. The country is littered with LNG import proposals which made negligible progress.

The problems will not vanish overnight. However, local players are increasingly knowledgeable about the international LNG market; and conversely, the country’s gas-fired generation and LNG projects are garnering interest from a growing roster of international developers and lenders.

LNG use may not increase as fast as in some countries or as fast as at one time envisaged in official plans, but that is not necessarily a bad thing. But if LNG requirements do exceed 32.6mn mt in 2030, at least 17.6mn mt of additional LNG capacity will be needed on top of the two operational FSRUs and Matarbari project.