With the arrival of the floating terminal, Lithuanian Klaipeda LNG facility may become operational in December 2014 and begin receiving gas from all over the world.

However, just as the decision and persistence of the Lithuanians to build an LNG terminal will inevitably influence the market of all three Baltic States, past decisions by the Latvians next door regarding their natural gas market may yet prevent an accelerated integration of the Baltic energy market.

Construction and arrival of the new LNG terminal within three-and-a-half years since the Lithuanian government’s decision upon it - this apparently is what happens when a nation is treated by its gas supplier with a “stick and carrot” strategy. For several years, Lithuania has been paying the highest bills in the EU for Russian Gazprom’s gas (figure below) for disadvantageous political decisions it has taken. 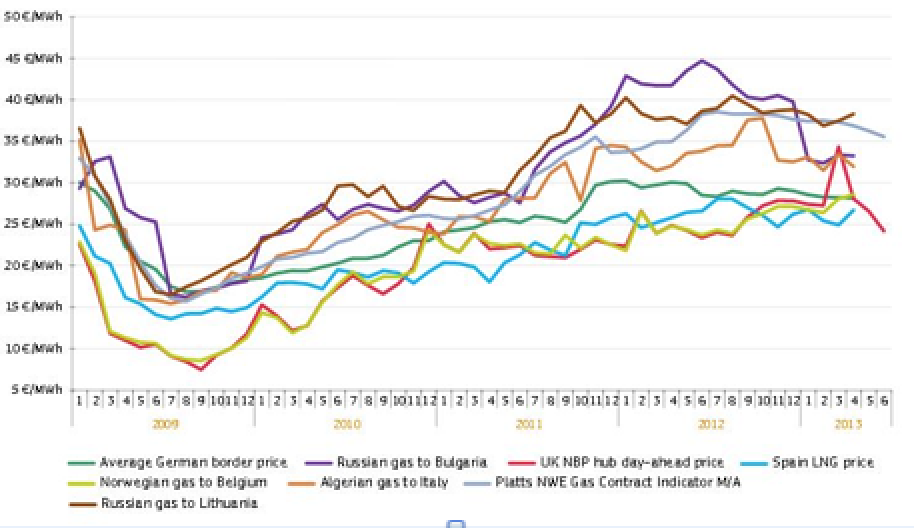 Lithuania consequently mustered the political will to open an alternative supply route, and was the first of the Baltic States to construct an LNG terminal. Moreover, it is likely that this terminal will be the last one in the Baltic States too, as “Independence” has sufficient technical capacities to fully cover not only the demands of Lithuania, but also most of the demands of all three Baltic States. The maximum annual capacity of “Independence” is said to be 4 billion cubic meters (bcm); in 2013, Lithuania imported 2.7 bcm of Gazprom’s natural gas, Latvia 1.1, and Estonia 0.7 – 4.5 bcm altogether.

The European Commission’s (EC) Energy Security Stress Test, published on 16 October 2014, revealed that once the Klaipeda LNG terminal enters into operation, supply for the protected customers would be ensured in all the three Baltic States in all scenarios – including a hypothetical long term Russian gas supply disruption. The EC estimates that together with Inčukalns Underground Gas Storage Facility in Latvia, Klaipeda LNG terminal is one of two key infrastructures for the Baltic States to rely on in case of severe disruption of Russian natural gas supplies.

However, two out of three Baltic States, Latvia and Estonia, may need to wait until mid-2017 to start fully enjoying gas from the “Independence” terminal and the gas market integration of the Baltic States. This is due, first, to the privatization clauses of the largest natural gas incumbent, Latvijas Gāze, a process which took place throughout 1994 to 2002; and, second, to the Latvia’s  exemptions from the EU’s Third Energy Package (2009).

The first event ensured that, as envisioned in the terms of privatization, until April 2017 – twenty years since Russian Gazprom acquired 34% of its stakes – Latvijas Gāze would have a legal monopoly and exclusivity in the Latvian gas market. Another major shareholder of Latvijas Gāze, German E.ON Ruhrgas, has been withdrawing from the Baltic region, and has already sold its stakes in Latvian and Estonian natural gas incumbents. If it sells its 47.23% stake in Latvijas Gāze to co-owner Gazprom, the latter would own more than two-thirds of Latvijas Gāze’s shares.

The second event ensured that terms of Latvijas Gāze’s legal monopoly do not act against the core principles of the EU energy market integration, such as consumer liberalization, third-party access to the pipeline, and unbundling of vertically integrated energy monopolies, because Latvia successfully applied for the derogation from the relevant clauses of the Third Natural Gas Directive, adopted in 2009. The Third Natural Gas Directive had to be transposed in the EU States by 2011, but, since Latvia is exempted from it, Latvijas Gāze was not obliged to allow third-party access to the Latvian transmission system.

Despite the exemption from the Directive, Latvia had had plans to liberalize its market since April 2014 – already later than other Baltic neighbors. However, in March 2014, at a time when “Independence” was already on the way to the Baltic Sea, Latvia changed the Latvian Energy Law and postponed some keystones of liberalization until 2017, in accordance with terms of privatization agreement, including the unbundling of vertically-integrated company Latvijas Gāze.

Latvia happens to be geographically placed between Lithuania and Estonia. Should a Latvian or Estonian client – be it a domestic consumer or a large industrial one – decide to acquire gas via “Independence” in Lithuania, there may arise considerable difficulties to do so, at least for a couple more years.

Vija Pakalkaite is a PhD student at the Doctoral School of Political Science, Public Policy and International Relations, Central European University, and a researcher at CEU Energy Policy Research Group (energy.ceu.hu). Vija‘s main research interests are energy policy, security of supply and competitiveness, especially in the natural gas markets of the European Union.

Lithuanian LNG operator says capacity all booked up until Sept