Azerbaijan’s opportunities and challenges in flaring and methane emissions

First gas deliveries from Azerbaijan to Europe were launched in January 2021 via newly built Southern Gas Corridor pipeline infrastructure linking the Caspian gas producer to the Italian gas hub. The 3,500-km pipeline system is expected to bring 10bn m3/year of gas to Europe (in addition to another 6bn m3 to Turkey). It will account for 2.5% of gas consumed in the EU.

In addition to being a new exporter of natural gas to Europe, Azerbaijan is one of the world oldest oil producers, with its production history having commenced back in 1848. Oilfields located next to Baku were discovered while the area was still under the Russian Empire rule and marked the early history of the petroleum industry. Under the Soviets, new discoveries of oil in the Caspian offshore were made by Schlumberger brothers, the founders of the world-famous oilfield service company. Although in the second half of 20th century many viewed the Caspian oil as a glory of the past, as the production levels were outstripped by the development of West Siberian oilfields, new hydrocarbon reserves were discovered with new exploration methods.

As a result, the years since the independence of the Republic of Azerbaijan from the USSR have seen a new impetus in petroleum extraction. New discoveries have resulted in new production and export volumes which provide up to 90% of the country’s export revenues. In turn, the EU demonstrated its own interest in diversification and established the Inogate programme, launched in 1996 and aimed at assisting infrastructural connectivity between the Caspian and Europe in order to find an alternative to either Russian or Middle Eastern routes of energy supply. Attention gradually shifted from oil to gas. Oil production volumes have been on their decline since the early 2010s, while natural gas production has increased. In this context, the EU supported both politically and financially the Southern Gas Corridor, consisting of three connected pipelines.

The EU invested significant efforts into diversifying its oil and gas supplies and hence the commitment to the Caspian as an alternative source of its gas. A switch to natural gas imports from Azerbaijan would correspond to the transition to natural gas, deemed to be the cleanest fossil fuel.

However, these long awaited gas supplies from Azerbaijan to Europe might face a new challenge – the energy transition towards a carbon-neutral economy, which diminishes the role of fossil fuels in the EU energy mix. If in the last few years, natural gas has been viewed mainly as the transition fuel deemed to be the least carbon-intensive fossil fuel, nowadays the industry is criticised for being responsible for a significant share of worldwide methane emissions. Consumers, especially in Europe, are becoming increasingly sensitive to the supply-chain emissions associated with their gas.  It will not be long until producers will need to prove that their gas counts as “low carbon”.

In the context of the recently adopted EU Green Deal and a specific methane emissions strategy, Azerbaijan will need to ensure a low greenhouse gas footprint for its natural gas to be a viable partner of the EU. Otherwise, in the long term, all the previous efforts and investments into the new gas pipeline infrastructure will become stranded assets.

The issue of methane emissions is, therefore, of pivotal importance for Azerbaijan to maintain market access to European buyers. To date, the hydrocarbon industry has mostly worked to reduce emissions from gas flaring from the upstream oil and gas sector. Since any hydrocarbon extraction implies releasing surplus methane and associated gases, companies often choose to flare the gas, the combustion of which generates the CO2. If those gases are not flared, and are just released into the air in methane form instead, the environmental damage becomes even greater.

Good progress with gas flaring but …

The good news is that Azerbaijan was able to significantly reduce gas flaring between 2012 and 2015, particularly in comparison with other Caspian peers (see Figure 2). A joint working group between Socar and BP — the largest international investor in the Azerbaijani hydrocarbon sector — was established to minimise the flaring of associated gas (which is the largest source of carbon dioxide emissions in the sector). As a result, Azerbaijan has a low “flaring intensity” (i.e. flaring per unit of oil production) around 28 ft3/barrel, a figure comparable to advanced hydrocarbon producers such as Norway and Saudi Arabia (Figure 1). 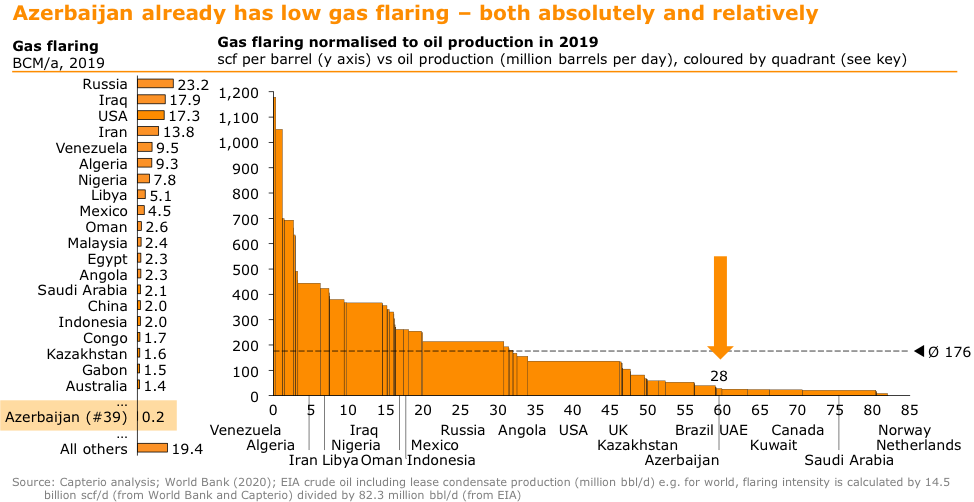 Figure 1: global league table of gas flarers, shown on an absolute and relative scale. Satellite estimates for Azerbaijan flaring are 223mn m3 in 2019, leading to a “flaring intensity” (flaring per unit oil production) of 28 ft3/barrel

However, the World Bank satellite data confirms that the absolute volumes of flaring has increased since 2017 – and so too has the “flaring intensity” (Figure 2).  Increases in flaring intensity may indicate a deterioration of operational performance (or changes due to the intrinsic gas-to-oil ratio of the producing fields).

Figure 2: Regional map showing the distribution of flaring in the region and estimates of flaring and flare intensity from satellite data provided by GGFR/World Bank and Capterio’s Global Flaring Intelligence Tool.

…Methane emissions are also in focus

CO2 is however a “lesser evil” compared to methane.  In addition to flaring (which itself is a significant emitter of methane, from so-called “methane slip” (i.e. incomplete combustion at the flare tip), the industry also releases venting and fugitive methane (or leaks), some of which is associated with gas transportation.

Methane emissions have been as high as 0.4bn m3/year, according to the International Energy Agency recent methane tracker. It might be worth noting the extensive risks posed when flaring is replaced by venting, which seems to occur in the Caspian basin at least from time to time. Overall, fugitive and vented methane emissions in Azerbaijan are estimated at 24mn CO2-equivalent tonnes of emissions if 20-year global warming potential is considered (over two decades, methane is 84 times more potent than CO2). On top of that, significant methane emissions create a revenue loss for Azerbaijan, which can reached $76mn annually (Figure 3). 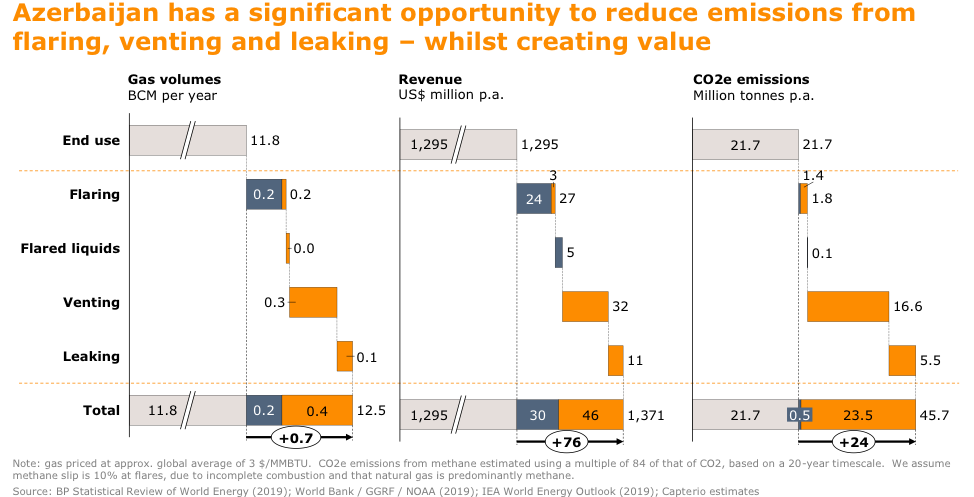 Figure 3: Overview of the wasted natural gas from flaring, venting and leaking, and its revenue and CO2 impact. The contribution to CO2-equivalent emissions from venting and leaking are significant, not least because of the relative potency of methane as a greenhouse gas.  We use a 20-year Global Warming Potential, meaning that methane is 84 times more potent than CO2 over a 20-year basis.  Source: IEA Methane Tracker, World Bank, BP Statistical Review of World Energy, Capterio analysis.

As a result, criteria for a climate footprint will not solely be based on flaring reduction but also on mitigating methane venting and leaking. However, it remains difficult to determine the exact volume of methane emissions. Top-down estimates provided by the International Energy Agency cannot reflect all the possible emissions at component or facility level, which implies a bottom-up approach which is still at the embryonic stage in the analysed region. In 2019, Azerbaijan’s state-owned company Socar joined the Methane Initiative, and within this international voluntary framework, the company decided to install infrared cameras for methane emissions monitoring. Methane inventorisation is both a costly and lengthy process which should lead to a consistent leak detection and repair programme. As a result, natural gas from Azerbaijan would gain necessary certification and methane emissions standards.

It might be worth noting that some methane emissions associated with oil and gas operations are commercially challenging to reduce. Emissions occur during the liquid unloading to the wells necessary to optimise extraction of hydrocarbons, during the usage of chemical injection pumps to repair deficiencies, and in using pneumatic controllers required for the pipeline system to stimulate gas flows. One of the solutions for methane emission reduction is the replacement of fuel-based equipment with electric ones whenever possible. However, this leads to the higher electricity consumption which further requires a reliable power system which ensures the industrial processes with no interruption. The recent crisis in Texas revealed that both hydrocarbon and power supply systems can be affected at an unprecedented scale for natural reasons with no expected reasons for the crisis.

Azerbaijan’s electricity sector reliability still needs to be improved, and the country will require incremental generation capacity to satisfy needs in agriculture and in rebuilding of post-conflict areas of Karabakh. At the same time, methane emission reduction can help in providing better power reliability since Azerbaijan’s electricity sector is increasingly dominated by natural gas on expense of oil products (Figure 4). 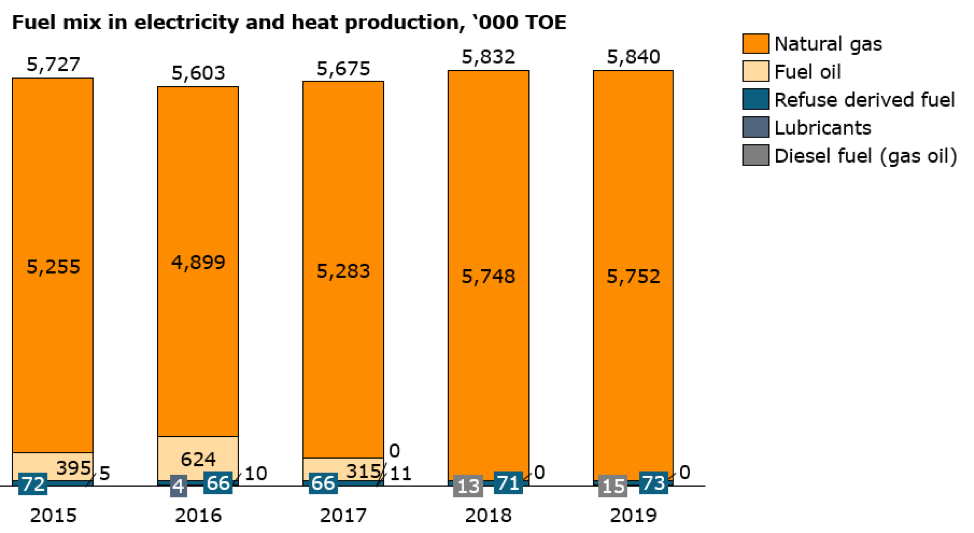 Methane emissions reduction can save additional gas for electricity generation and can be even used for smaller-scale power production. Adding to that, reliability of power supply requires investment into digitalisation, which is again an energy-consuming activity requiring additional power input. In short, one may advocate for an innovative circular economy approach, as reducing the methane surplus from flaring, venting and leaking contributes to digitalisation, while digitalisation can support increased energy efficiency and lead to a smaller carbon footprint.

Methane emissions reduction is a complex agenda, which needs a consistent approach backed by both the industry and the public sector. In this respect, exports to Europe can be a solid stimulus for Azerbaijan to take pro-active steps. Partly the pro-active steps will depend on the external dimension of the EU methane emissions strategy, and on the mechanisms to be used by Brussels to assist Azerbaijan.

Expanding the methane strategy beyond

The early 2021 has seen a rapprochement between Azerbaijan and Turkmenistan as the two Caspian states solved their disputes over Kapaz/Sardar offshore oilfields located on the disputed territorial waters. In the perspective of gas extraction from the same fields, Turkmenistan might be both capable and interested in joining Southern Gas Corridor and getting access to the European markets as well.

As a result, with the natural gas link between Caspian and Europe, as well as with pro-active steps – both potential and existing – in reducing carbon footprint from the oil and gas sector, Azerbaijan could become the starting point for a further EU methane strategy in the region addressing the even more complex case of methane emissions that occur in Turkmenistan. Overall, the Caspian could become a good starting point for a EU methane emissions strategy outside Europe.

US gas supply forecast is bullish, but prices are bearish as storage surpluses continue to grow [GGP]