It may sound strange that the world’s largest exporter of liquefied natural gas (LNG) could also become an importer of the fuel, but that is exactly the situation Australia has been facing.

The country’s LNG exports have skyrocketed in recent years and Australia now outstrips Qatar in terms of export capacity. The rise in sales to foreign buyers has driven up local prices and led to forecasts of supply shortages on the East Coast market from 2024. But the slump in international gas prices this year has deterred buyers from signing up to long-term agreements, as Australian exporters have increased supplies to the domestic market.

Five LNG import projects have been proposed for the country’s southeast. While some are not expected to reach a final investment decision (FID), even those projects expected to make it are struggling in the face of long-term challenges and low international gas prices.

Reuters reported on November 4 that Australian Industrial Energy’s (AIE) planned A$250mn (US$172.4mn) terminal in Port Kembla in New South Wales was facing delays after struggling to lock in customers. This means the project will likely miss its target of first gas deliveries in late 2020.

AIE was created by Japan’s largest LNG buyer Jera, trading house Marubeni and Australian owned Squadron Energy in 2017. The venture’s project is one of two, along with AGL’s similarly priced development in Victoria, that are considered most likely to be realised. 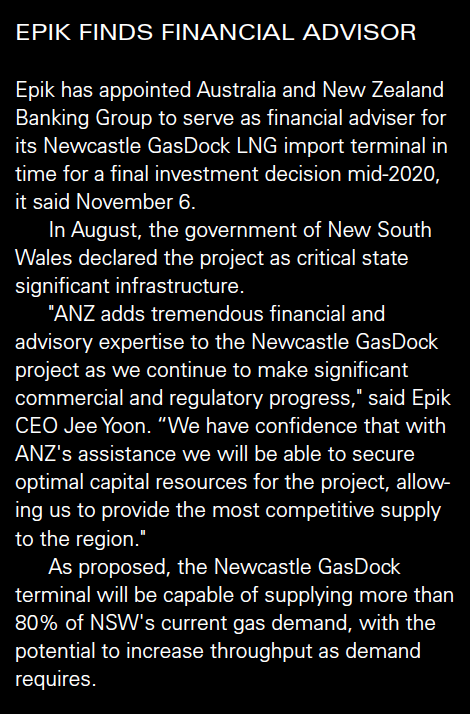 Although AIE has lined up its first customer in Energy Australia, hired a floating storage and regasification unit (FSRU) and booked contractors to build its wharf facilities, Squadron CEO Stuart Johnston told Reuters November 4 that it had failed to close deals with 12 industrial users that had expressed interest in 2018. Moreover, some of those had even walked away entirely. Johnston refused to give a timeline for the project’s likely start-up, saying: “I’m not hanging dates out there at the moment.”

He added that the facilities could start delivering gas within 16 months of an FID. That FID hinges upon securing the state government’s approval to expand imports by around 20% above its original plan. AIE applied in late October to change the number of approved annual shipments from 26 via 170,000 cubic metre vessels to 46 via variable-sized vessels. The company wants to increase supply flows during the Australian winter, when residential demand spikes.

An improved supply situation on the international LNG market, driven by new capacity additions and slower than anticipated demand from Asian buyers, saw spot prices fall earlier this year to 10-year lows. In August, for example, the price slipped below US$4/mn Bt – down steeply from the $11/mn Btu recorded in August 2018. Average spot LNG prices for December delivery in northeast Asia averaged US$5.90/mn Btu, down US$0.40/mn Btu from the previous week.

With international prices depressed, Queensland State’s export projects have had little incentive to sell on the spot market and have been willing to divert gas back to domestic buyers.

In late September, the ConocoPhillips-led Australia Pacific LNG (APLNG) said it would supply an additional 61 PJ (1.59bn m3) to local buyers. Santos said in its quarterly reports that it opted to supply 40 PJ to the domestic market rather than liquefy and export the gas through the Gladstone LNG terminal.

This renewed focus on the domestic market is not only driven by financial imperatives, but also by the central government’s mounting pressure on industry to do more to tackle rising local energy prices.

The mechanism ensures that projects do not tap the local market to feed their contractual obligations, but it does nothing to promote gas production for the local market. Once the Queensland gas export projects came online in 2014, Australian prices began rising and had tripled by 2018.

As gas production surged for foreign buyers willing to pay a premium, local production did not keep pace. Moreover, the Queensland export projects began dipping into the local market to help bridge a gap in their own upstream efforts.

All of this has culminated in mounting pressure from residential and industrial gas users who want to see gas prices lowered. In August, the Australian government said it would formally examine the Western Australia State government’s domestic gas reservation scheme. WA requires 15% of all export-orientated project’s gas production be sold into the local market.

The energy sector has taken a pretty dim view of this position. The Australian Petroleum Production and Exploration Association said November 1 that it had made a submission to the ADGSM 2019 Review that reiterated its view that the ADGSM was unnecessary and that there had been no supply shortfalls since its introduction. The body added that the industry had responded to “perceived shortfalls” in gas supply and highlighted that “such interventionist measures” increased sovereign risk and hurt investor confidence.

It seems likely that Australia will introduce some form of gas reservation scheme, but it remains to be seen whether this is modelled around WA’s reserve policy or if it adopts Queensland’s approach of ring-fencing future production for the domestic market from specific permits. Queensland has released more than 39,000 km2 of exploration acreage since 2015, with more than 20% of that designated for the local market. This percentage is set to rise given that Brisbane intends to release 30,000 square km of new land with more than 30% of the that earmarked for domestic supply.

The Bridge: Natural Gas in a Redivided Europe [NGW Magazine]