Australia already has more LNG production capacity than former leader Qatar and has actually shipped more LNG on occasional months over the past year. Analysts EnergyQuest calculate that Australia exported 75.1mn mt of LNG in financial year 2018-19, a big increase on the 61.7mn mt shipped in 2017-18.

However, the country is unlikely to remain the world’s leading LNG producer for long. The US Energy Information Administration forecasts that the US will take the top spot by 2025, while Qatar plans to increase its production capacity from 77mn mt/yr at present to 110mn mt/yr by 2024. 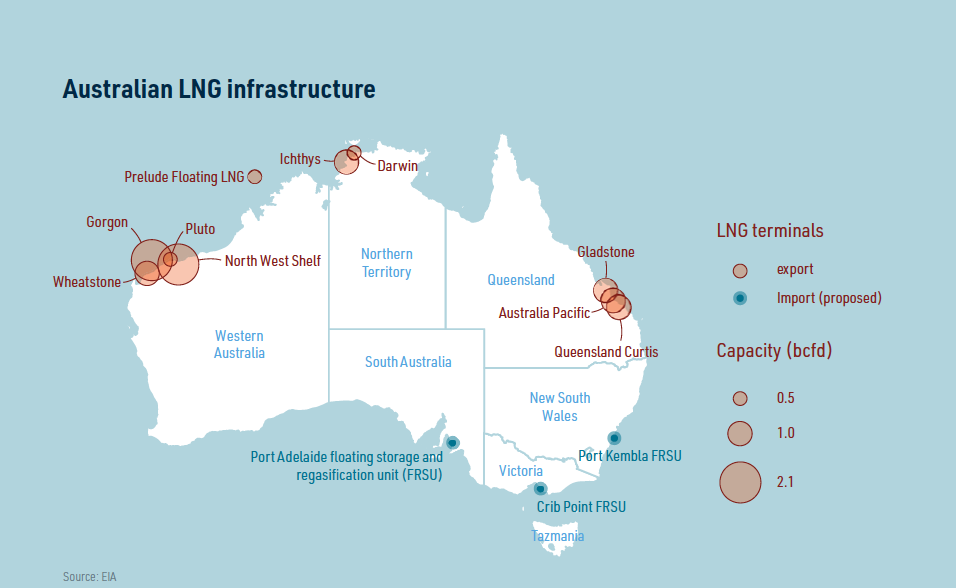 The main markets for Australian LNG are the world’s three biggest LNG importers: Japan, China and South Korea. Japan took 41% of all Australian LNG in 2018-19, but could soon be overtaken by China, which received 37% in 2018-19. Chinese importers were particularly keen to buy Australian spot LNG cargoes during the winter months. China sourced 46% of its LNG imports from Australia over the year and state oil and gas companies China National Offshore Oil Corporation (CNOOC), PetroChina and Sinopec have now bought into three Queensland producers: QCLNG, Arrow Energy and APLNG.

Graeme Bethune, the CEO of EnergyQuest, commented: “The concentration of Australian LNG trade in North Asia is both a strength and weakness. A strength as North Asia is the world’s largest and fastest-growing LNG market. A weakness from lack of diversification and the risks this involves ... Not only is Australia exposed to a few countries, China and Japan in particular are also heavily exposed to Australia and this may place a ceiling on future contracts.”

Australia’s production capacity stood at just 19.8mn mt/yr in 2011, but eight projects have been completed since then. Five have been developed using natural gas fields in the north-west: Gorgon, Ichthys, Pluto and Wheatstone onshore, plus the Prelude floating LNG (FLNG) project.

They have built on the start made by the established North West Shelf scheme, while gas has also been piped from Timor-Leste to the Darwin LNG plant. Australia’s Department of Industry, Innovation and Science (DIIS) forecasts that exports will reach 82.1mn mt/yr by 2020 as the Ichthys, Prelude and Wheatstone projects reach full production.

Taken collectively, the LNG projects are generally considered to have cost more to develop than originally envisaged, partly because developing so many trains at the same time drove up the cost of labour and materials. Most recently, Shell shipped its first cargo from Prelude in June, a new build FLNG project that also overran significantly on cost. The first shipment was made two years after the vessel arrived at the location and eight years after the final investment decision was taken.

Production is quickly being ramped up on Ichthys towards its production capacity of 8.9mn mt/yr. It shipped its first cargo last October, almost two years behind schedule, with construction costs 32% higher than expected at $45bn. The plant site has space for four more trains and there is spare capacity in the supply pipeline network for additional fields to be tied in. 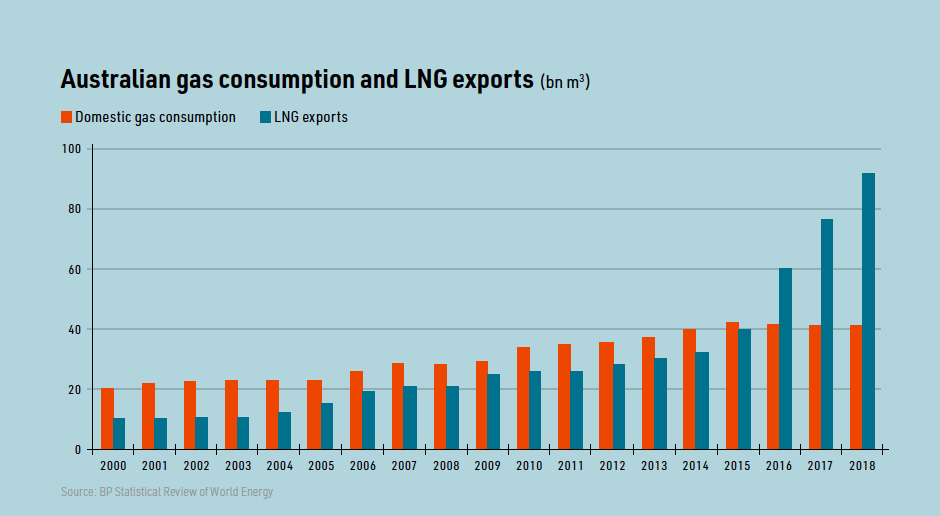 There is also scope for coal seam gas (CSG) production in the Beetaloo Basin in the Northern Territory, where operator Inpex is already seeking permission to begin operations. Inpex’s president director for Australia, Hitoshi Okawa, said in September: “Our focus is on fully utilizing our Ichthys LNG facilities while creating a solid base for future expansion.”

North-west Australia remains the heart of the country’s LNG industry, with production capacity of 61.5mn mt/yr. There is little local demand for the gas and despite occasional plans for a cross-continental pipeline to the main gas and power markets in the south-east of the country, the cost of building such a long pipeline has generally been considered prohibitively expensive.

However, a pipeline has been proposed from the Amadeus Basin in the centre of the country to New South Wales.

The situation in the east of the country has been more challenging and more controversial. Advances in unconventional gas technology raised the question of whether LNG plants should be built in Queensland to take advantage of the state’s CSG, or whether it should be piped south to domestic consumers.

The policy of successive federal governments has been that export in the form of LNG was fine as long as domestic needs were not affected. The Australian Domestic Gas Security Mechanism (ADGSM) was put in place to ensure domestic supply, but it has not been as effective as hoped.

The main reason for the domestic supply problems has not been the use of CSG to supply the three plants, but rather lower than anticipated CSG production, which has prompted the LNG producers to make up the shortfall by buying natural gas that would otherwise be consumed within Australia, driving up prices in the process.

Production on established fields in the south-east has declined over the past few years, yet the state governments of New South Wales and Victoria have banned new onshore developments. As a result, plans for three floating storage and regasification units (FSRUs) have been drawn up for Adelaide in South Australia, Crib Point in Victoria and Port Kembla in New South Wales, with imports from 2021 at the very earliest.

Some of the LNG supplied could come from Australia’s own plants. If a conscious decision had been taken to ship LNG from the north-west to the south-east of Australia, then the current situation would be understandable. Yet no matter how the government paints it, the fact that the world’s biggest LNG producer needs to import liquefied gas seems a policy failure.

In August, Port Kembla LNG developer Australian Industrial Energy announced that it had asked the government of New South Wales to alter the development consent granted for its FSRU in April to allow for a bigger project because of higher than expected demand. A company spokesperson said: “While the planning modification process will take some time, AIE remains confident that it can develop the project in advance of customer needs”.

Restrictions on LNG exports can be put in place by the minister for resources and northern Australia, who decides whether or not a shortfall market exists, based on the advice of the Australian Energy Market Operator (AEMO) and the Australian Competition and Consumer Commission, among other sources. If she or he concludes that it does, then LNG restrictions are imposed unless the industry as whole makes up the shortfall. The AEMO now says that the east coast could have prolonged gas shortages by 2024, far sooner than the 2030 it predicted last year.

As a result of rising prices, the government has brought forward its scheduled review of the ADGSM and is currently seeking public submissions. Canberra is also reported to be considering replicating Western Australia’s reserve gas scheme, which ringfences gas for local use, on the east coast. The current minister for resources and northern Australia, Matt Canavan, conceded in August: “There has been a question mark about to what extent prices play a role in our decision-making under the gas export control framework.” 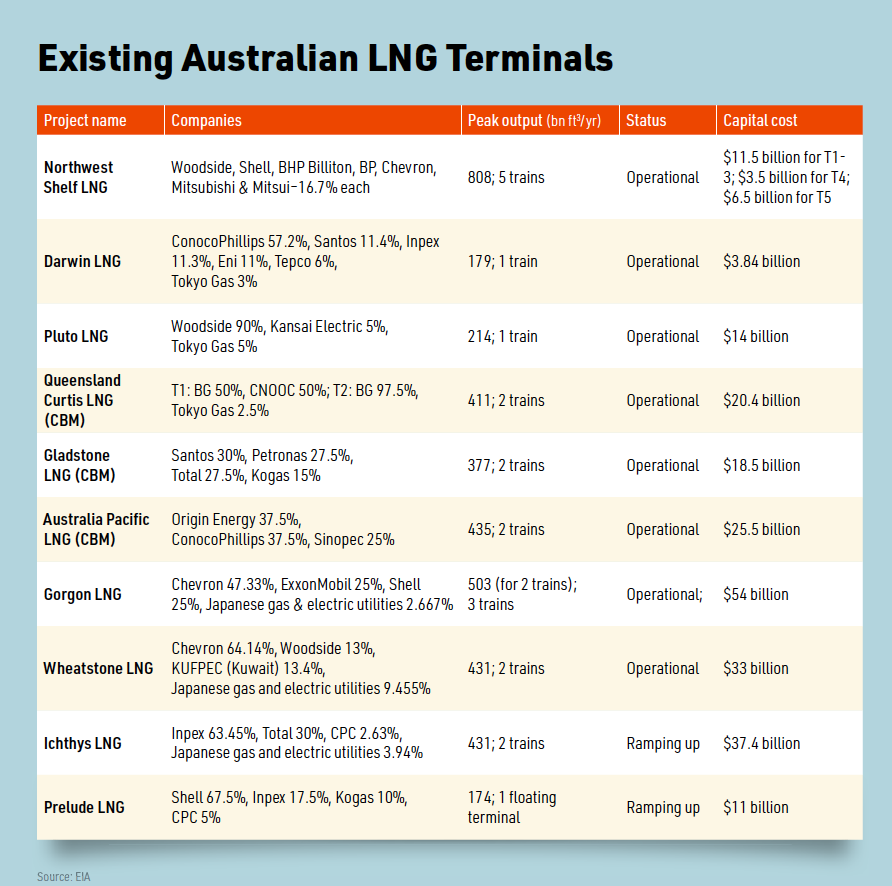 He said: “Imitation is the best form of flattery and what we’re seeking to do is imitate the best things about what is working in the west and possible apply it to eastern Australia. Our market is different over here; we’ve got multiple state governments, a pipeline network that straddles those jurisdictions, so we’ve got to work through a lot of issues.”

However, Canberra could be reluctant to limit LNG production because the industry generated $50.5bn in export revenues in financial year 2018-19, making it the country’s third most valuable export, after iron ore and coal.

At the start of July, Australia Pacific LNG agreed to supply 9.67bn ft3 of natural gas to explosives manufacturer Orica over four years and 5.68bn ft3 more to packaging manufacturer Orora over three years, from 2021 and 2023 respectively. Such deals could help to deter government intervention and maximise LNG production.

In a statement, the Queensland Resources Council said: “Queensland’s neighbours must take a leaf out of our book, instead of relying on our state to meet the gap caused by their failure to develop their own gas industries. Gas exploration has stalled in New South Wales and Victoria, despite the fact that all jurisdictions have their own reserves in the ground.”

Australia Pacific LNG (APLNG) will supply an additional 61 petajoules (1.63bn m3) of natural gas to the Australian domestic market after reaching a new gas sales agreement with Origin Energy for 2020 and 2021, it said September 26.

APLNG CEO Warwick King said this additional gas forms part of the company’s ongoing commitment to make more gas available domestically. “We are very pleased to be able to supply this significant additional volume of gas to the Australian market. We are actively working on more domestic gas sales and encourage manufacturers and other buyers with gas needs to contact us,” he said.

“By reaching an agreement with a retailer, more natural gas produced by Australia Pacific LNG is able to reach end-users outside Queensland,” King said.

This new contract increases APLNG’s total domestic contracted supply commitment to over 340 petajoules for 2020 and 2021, representing more than 30% of total east coast domestic demand for each year, it said.

“In 2018, APLNG supplied on average over 600 terajoules/day into the domestic market – more than the entire average daily gas demand of Queensland. This new contract will work to ensure substantial and industry-leading levels of supply through 2021,” he said.

Origin in a separate statement said pricing would be primarily oil-linked and supply shaped to meet seasonal domestic demand. The company’s executive general manager for energy supply and operations, Greg Jarvis said: “This is a substantial amount of gas which will be available to customers during the high demand winter months.”

The Queensland Resources Council (QRC) issued a statement welcoming the deal. “I applaud APLNG for helping to put downward pressure on energy prices by increasing supply into the domestic market through this new agreement with Origin Energy. It’s another sign of the Queensland gas industry leading the nation with a proactive approach to developing its gas reserves” QRC CEO Ian said.

Meanwhile, Australian energy retailer AGL Energy has entered into an agreement with Esso Australia Resources, an affiliate of ExxonMobil, for the purchase of a total of 50 petajoules (1.34bn m3) of gas over two years, it said September 25.

The agreement will commence on January 1, 2021 and conclude on December 31, 2022, AGL said without commenting on the price of the gas. “AGL remains committed to securing cost-competitive gas supply for its customers from the domestic market, where it is available, and new gas supply from international markets through its proposed AGL gas import jetty,” the company said.

The agreement comes just months after AGL announced it has pushed back the start date of its Crib Point LNG import terminal near Melbourne. In June this year, AGL said it expects first gas to be delivered from the proposed facility at Crib Point in Victoria in the second half of fiscal 2022. AGL had previously indicated first gas could potentially be delivered during fiscal 2021.

You can download the latest issue of LNG Condensed here.

The LNG industry is booming, but is it ready for climate change? [LNG Condensed]