Australian east coast states are facing an unprecedented energy price crisis that has forced regulators to introduce gas price caps. The Australian Energy Market Operator (AEMO) on June 2 enforced a cap on gas prices in some Australian states in response to the recent spike in wholesale prices. It also announced on June 1 a guarantee mechanism to call on more gas supply, which was deactivated on June 2 thanks to strong gas flows from Queensland that bolstered deliveries to the southeastern states.

The AEMO announced an administered price cap of A$40 ($27.60)/GJ in the Sydney and Brisbane short-term trading markets (STTM) until June 7. On June 8, the AEMO lifted the cap for the Brisbane and Sydney STTMs. Under the National Gas Rules, AEMO enforced price caps in these markets following the failure of New South Wales (NSW) gas retailer Weston Energy in late May.

Victoria’s gas market remains capped at A$40/GJ after reaching a cumulative high price threshold on May 30. This will also remain capped until the cumulative price falls and remains below the threshold for a day.

“Supplies remain tight, with high gas demand driven by heating needs with colder weather and for power generation,” it said. “Gas producers in Queensland have responded to shortfalls in the southern states, following AEMO’s activation of the gas supply guarantee mechanism yesterday [June 1].”

AEMO in a report said that the wholesale electricity prices in the National Electricity Market (NEM) averaged A$87/megawatt-hour (MWh) for the first quarter of 2022, up 67% from Q4 2021 and 141% on Q1 2021, driven by increased demand, coal generator outages and higher electricity-generating fuel costs.

The price cap will remain in place at least until the end of the trading day, after which it will only remain in place if the cumulative price threshold is still exceeded. 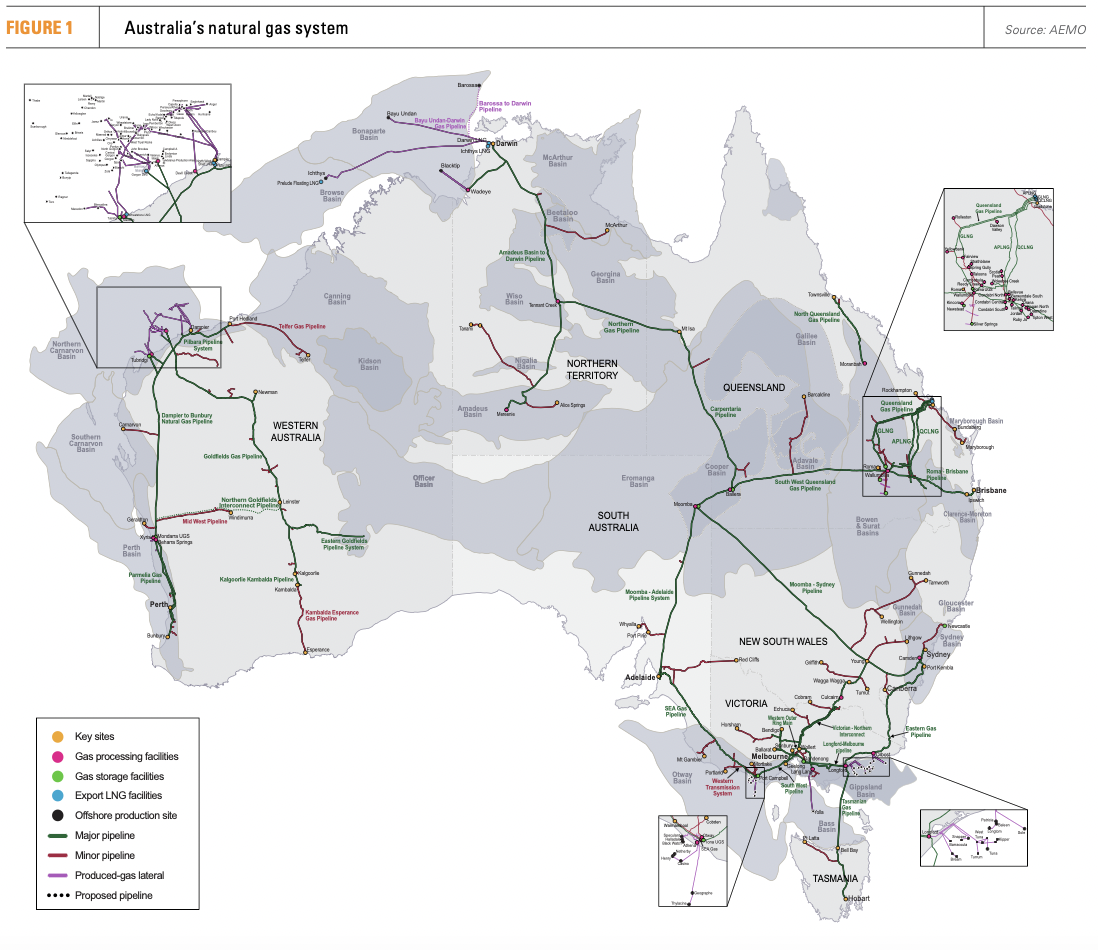 Power crisis not a gas crisis

The situation in Australia’s energy market is an electricity crisis and not a natural gas crisis, according to local energy consultancy EnergyQuest.

“I see the east coast energy price crisis as more an electricity crisis than a gas crisis. Electricity demand has increased but coal generation has fallen due to coal outages and closures and problems with coal supply in NSW,” EnergyQuest CEO Graeme Bethune tells NGW. “Renewables have only been able to partially fill the gap so gas-use has jumped from supplying 6% of NEM generation in May 2021 to 9% in May 2022, with predictable gas price consequences."

The crisis in the coal-fired generation is so severe that leading Australian electricity supplier Origin Energy on June 1 said that it was finding it hard to source coal for its Eraring power station in NSW and expects the situation to persist for the year to June 2023 (FY2023). Origin has withdrawn all guidance for FY2023 due to uncertainties in the global and Australian energy markets.

According to EnergyQuest, there has not been any big change in LNG exports from east coast producers. In May 2022 the east coast exported 1.98mn metric tons of LNG, down slightly from 2.07mn mt in April and the same as 1.98mn mt in May 2021. Data released by Gladstone Port Corp on June 6 showed that LNG exports from the three projects on the Australian east coast came in at 1.83mn mt in May, down 2.5% year/year. The exports were down 10.3% month/month.

Australia’s peak oil and gas body APPEA in a statement said that volatility in east coast spot price markets was because the energy system as a whole was under pressure and relying more on gas.

APPEA acting CEO Damian Dwyer said: “This is particularly because of coal outages, relatively low levels of renewable power generation as a result of weather conditions and international market pressures arising from the Russian invasion of Ukraine.”

Dwyer said that the domestic supply is secure and at near record levels. “While we understand that current spot prices are under pressure and we are working with all parties to resolve this issue, the vast majority of manufacturers are either long-term, lower price contracts or aren’t major users of gas and so not materially affected by gas prices,” he added.

The Australian government in 2017 introduced the Australian Domestic Gas Security Mechanism (ADGSM), which enables it to restrict LNG exports should there not be sufficient supply of gas at home. Subsequently, the east coast LNG projects, Australia Pacific LNG, Queensland Curtis LNG, and Gladstone LNG all agreed through a heads of agreement (HoA) to ensure they would keep the east coast market supplied.

The ADGSM gives the federal government the power to impose LNG export curbs. If the government assesses that there will be a shortfall of domestic gas supply in a calendar year, and that LNG exports contribute to the shortfall, the exports will be restricted for that year. Since the introduction of the ADGSM in 2017, the Australian government has not declared a domestic shortfall year. The next review of the ADGSM is due in January 2023.

Australian resources minister Madeleine King on June 9 said the government will be conducting an urgent review of the ADGSM to “make it actually work”.

“As many would know, the ADGSM is due to expire on 1 January next year. The former government, the coalition government, left us with a mechanism that is at its end,” the minister said. “We have resolved today as a cabinet to make sure that mechanism remains a tool of government to ensure future supplies of gas in this country, and so we will move as quickly as possible to make sure that gas security mechanism for domestic supply is renewed as soon as possible through regulation.”

King said that the mechanism in its present shape is a “long and complicated, convoluted, ineffective mechanism that takes a very long time for it to produce results”.

“We are determined to change that, and we’re determined to make sure that this mechanism, as well as the other tools available to us, are all on the table so that we can ensure gas supplies are appropriate, adequate and affordable for Australians right across the country,” she said.

The federal government will also start to renegotiate the HoA with the east coast LNG producers. “We need to have this heads of agreement renewed so that we can again, along with the domestic gas security mechanism, ensure that there are gas supplies that are affordable, adequate for southern Australian states,” King said.

Appea in a statement said that the industry will work constructively with the government’s review of the ADGSM and renegotiation of a new HoA. “But it is important to note that any changes must be carefully considered to maintain investment confidence in Australia,” Dwyer said.

“The ADGSM has never been triggered, as the gas market has always been in surplus. This has been confirmed in eleven consecutive reports by the Australian Competition and Consumer Commission. In addition, the industry has met all of its obligations under each of the three HoAs that have been in place since October 2017.,” he added.

Dwyer said that encouraging further investment in gas supply in Australia is key and any changes that might be considered must factor this in. “In particular, any proposed reforms must recognise the key role signatories play in the domestic market and the key trade and diplomatic relationships we have developed over generations with major trading partners in Asia,” he said.