The Williston Basin’s Bakken play – the most productive portion of which lies in North Dakota – may not make as many headlines as the Permian Basin but drillers in the formation are grappling with some similar challenges.

Like some of the Permian’s formations, the Bakken yields a considerable amount of associated gas. According to the latest preliminary data from the North Dakota Department of Mineral Resources (DMR), the state produced 1.4mn barrels/day of oil and 2.95bn ft³/day of natural gas in the month of September. However North Dakota has been more proactive than Texas – which holds part of the Permian – in trying to reduce flaring of associated gas even as it promotes Bakken production growth.

“It’s a fascinating basin because locationally it’s always been disadvantaged,” a Moody’s Investors Service analyst, Andy Brooks, told NGW. This meant that the region struggled with oil takeaway capacity until the start-up of the Dakota Access pipeline in 2017. At the same time, a lack of gas-gathering, processing and takeaway capacity led to a rise in flaring as Bakken output grew. Now producers and state officials are looking at how to address the issue without allowing it to hamper future oil production growth.

“The basin has gotten a little bit more gassy – probably 25% of the output now is natural gas,” Brooks said. “North Dakota has put in place very stringent, escalating gas capture requirements, and state-wide production is not meeting those right now.”

North Dakota currently requires 88% of gas production to be captured, with this due to rise to 91% in November 2020. According to the latest available data, however, only 81% was captured in August, though this represented a new all-time high of 2.44bn ft³/day. The 19% of gas production that was flared in August marks a longer-term decrease from 36% flared in September 2011 in North Dakota – a historical high.

State-wide compliance with gas capture requirements is at around 91% according to Brooks. Indeed, he noted that some producers in the Bakken have managed to hold off on flaring altogether, preferring to wait until their wells are connected to gas-gathering infrastructure before starting production.

The build-out of such gas-gathering infrastructure – as well as processing plants and takeaway capacity – is proceeding at a rapid pace.

“A tremendous amount of work is going on,” the North Dakota Pipeline Authority’s director, Justin Kringstad told an energy conference that took place in the state in late October. “It’s head-spinning to think about all the work taking place currently and all the things planned for next year.”

Oneok Midstream is the leading player driving gas infrastructure development in the state. The company already has about 1bn ft³/day of gas-processing capacity in the Williston Basin, and is planning to increase this to 1.6bn ft³/day by 2021. Earlier in November, Oneok executives said they expected the company’s Elk Creek natural gas liquids (NGLs) pipeline to help bring flaring below North Dakota’s targets once it ramps up to full capacity in early 2020.

“Easily, I think with this processing capacity, once we get Elk Creek up and once everybody gets kind of everything de-bottlenecked, I think you're going to see flaring get back down below the state targets. I think that will happen,” Oneok’s executive vice president and chief operating officer, Kevin Burdick, said on the company’s third-quarter earnings call in late October. Oneok expects its NGL capacity expansions to pave the way for further growing its gas-processing capacity as well.

Hess – which is also the second-largest Bakken producer – is another player that is heavily involved in the infrastructure drive through master limited partnership (MLP) Hess Midstream Partners. The company has committed about $3bn toward the provision of gas takeaway and processing capacity across its Bakken acreage, as well as leaving some room for third-party operators to play a part. It is in the process of expanding the capacity of its Tioga gas-processing plant by 150mn ft³/day to 400mn ft³/day by mid-2021. 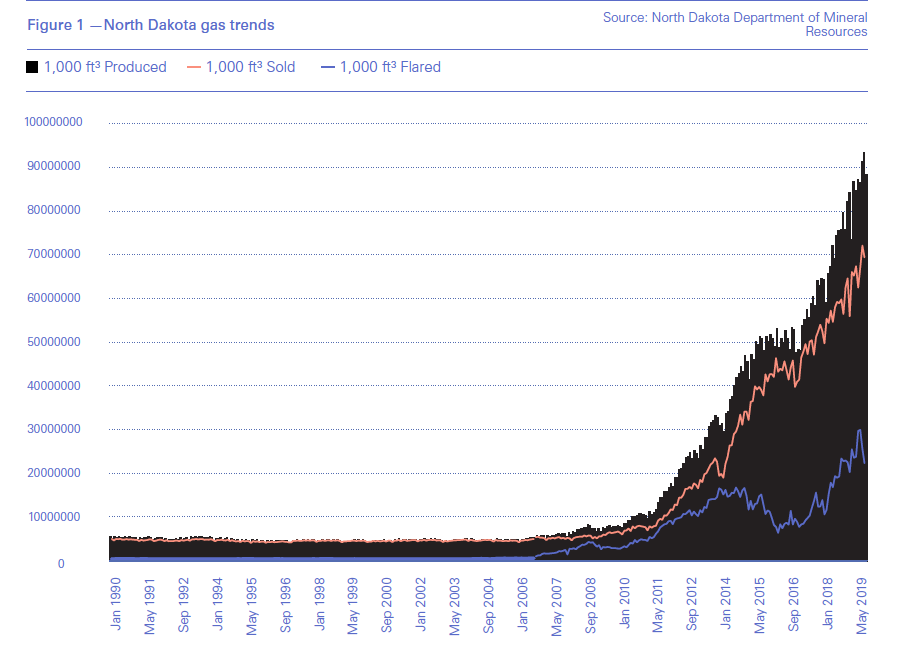 Meanwhile, Crestwood Midstream has invested $668mn in Bakken gas infrastructure to date. The company recently started up its Bear Den II processing plant, as well as the Station 8 compression station, as well as expanding pipelines that connect the Bear Den processing complex to the Arrow gathering system. Crestwood said in August that it expected producers served by Arrow to connect 110 new wells in 2019.

These projects – and others – are anticipated to help alleviate some of the gas bottlenecks in the Bakken and lead to a reduction in flaring. But while considerable efforts are being made to build new gas infrastructure in the play, producers seem fairly confident that associated gas output will not be a major cause for concern in the longer run. Nor do low gas and NGL prices appear to be deterring midstream players from building new infrastructure.

“Because the basin is so oil-focused and gas is almost an unwanted by-product, particularly at these prices, the processing of that gas seems to be profitable for the midstream guys,” Brooks said.

On the upstream side, he cited the example of Hess, which projects that its Bakken output will rise from 160,000 barrels/day to 200,000 barrels/day by 2021. “Of course they have an infrastructure business themselves so they’re able to self-help to some extent,” Brooks said. He added, though, that to him, this level of “aggressive” growth suggests the company is not expecting to have to dial back production in the region.

“The situation here is very different than what – theoretically – Permian producers could face,” Brooks said. Indeed, the Permian is now the second-largest shale gas-producing region in the US, according to the country’s Energy Information Administration (EIA). Soaring gas output volumes there have indeed acted as a brake on drilling activity in some cases.

The Bakken, meanwhile, has the lowest gas output volumes out of all seven major shale regions that the EIA tracks in its short-term drilling productivity forecast. And while state officials have warned of more stringent flaring rules potentially constraining oil output growth, these warnings should be balanced against producers’ expectations of their own output. Indeed, there are other factors that could come to act as stronger constraints.

“I think the bigger issue right now is that the Bakken is right at its capacity to move crude out by pipeline – the 1.4-1.5mn barrels/day that’s being produced,” Brooks said. “I don’t think there’s a gas issue here.”

This comes as service on the Dakota Access oil pipeline has allowed Bakken producers to ramp up activity to the point that crude bottlenecks are emerging once again. New capacity constraints threaten to exert downward pressure on regional oil prices, and possibly force producers to turn to more costly crude-by-rail as an alternative solution.

While the race is on to add new gas infrastructure to the Bakken, boosting crude takeaway capacity will take more time. Energy Transfer is proposing to increase capacity on Dakota Access, and a regulatory hearing on the proposal began in mid-November. However, given the levels of Native American and environmental opposition to the initial construction of the pipeline project, it would not be surprising if expansion plans run into delays.

Gas infrastructure expansions, meanwhile, have been far less contentious and will be able to proceed relatively unhindered by comparison. Indeed, given public perceptions of flaring, such gas capacity expansions may attract more support.

Giant Dutch Gasfield 'Will not be Turned back on': Minister