Asian lenders are not immune to these pressures. Earlier this month, environmental groups criticised the Asian Development Bank (ADB) for supporting almost $5bn in lending to natural gas projects since the adoption of the Paris climate agreement in 2015. Nearly two-thirds of this went to E&P projects and gas-fired power plants. At its recent annual meeting, the ADB announced it will end financing for future natural gas exploration and production projects, though it will still consider backing regional gas infrastructure and gas-fired power plants based on revised criteria.

Growing calls from capital markets and stakeholders for action on decarbonisation put many developing economies across Asia in a bind. With coal still accounting for around two-thirds of China’s primary energy mix and coal demand continuing to rise across many other markets, switching to natural gas is seen as critical to emission reduction goals. In fact, in some countries in Asia, we expect that faster decarbonisation is most likely to be achieved through an even greater role for gas to more aggressively displace coal while investment in renewables starts to ramp up.

But gas investment won’t happen without policy support. It is increasingly clear across Asia that governments, lenders, and both gas suppliers and consumers must prioritise the management of carbon emissions across the gas value chain. As in other parts of the world, the future of Asia’s gas markets needs to be carbon neutral, with necessary carbon pricing policies supporting gas demand combined with CCS and the transformation of gas into blue hydrogen. To support the push for net zero, Asia’s developing economies need more – and smarter – gas investment, not less.

Wood Mackenzie’s base case outlook for Asian gas demand reaches over 1.4 trillion m3 by 2050, an increase of over 70% from current levels. But how could a more determined push towards a 2-degree world impact in the future? Our accelerated energy transition (AET-2) scenario looks at one interpretation of how the Paris Agreement might play out to achieve a world that aims to limit the average rise in global temperatures to 2 °C by the end of this century.

As discussed in our April Horizons, Asian demand for natural gas remains strong in our AET-2 scenario, driven by coal-to-gas switching in developing economies and supported longer term through the large-scale deployment of CCS and blue hydrogen. Consequently, while gas demand in developed economies declines to 2050, Asian demand continues to grow. Indeed, in India and several Southeast Asian markets, gas demand grows faster in the AET-2 than in our base case as coal is displaced more aggressively. Driven by Asia, coal-to-gas switching achieves 8% of global CO2 reductions by 2050 under the AET-2. 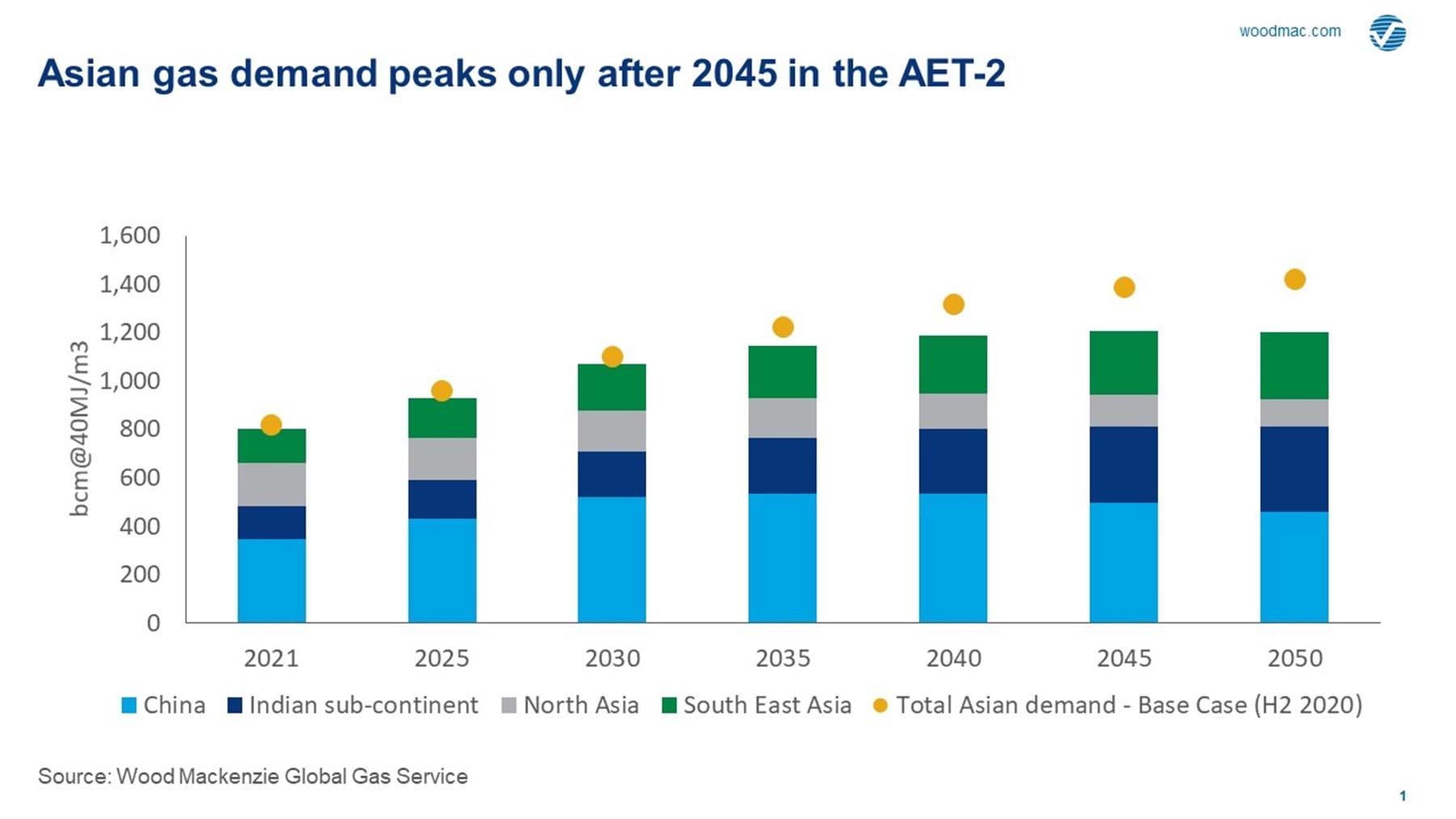 It is important to point out that a key assumption in the AET-2 scenario is that a number of big Asian markets don’t achieve net zero until some time after 2050. As such, the AET-2 scenario is relatively benign for gas, with significant demand growth to displace coal in power generation. However, a more ambitious pathway to a 1.5-degree world slows gas demand – both the recently published IEA Net Zero by 2050 (NZE) and Wood Mackenzie’s own AET-1.5 scenario model faster progress to slow global warming, with a corresponding impact on Asia’s gas demand profile.

Strong Asian gas demand growth continues to support the development of new LNG supply in our AET-2. And with post-FID supply expected to be lower than in our base case due to lower backfill supply, almost 300mn metric tons/year of pre-FID LNG supply is still needed by 2050. That said, this is some 180mn mt/yr lower than our base case.

But this doesn’t mean ‘business as usual’ for the LNG industry. Carbon mitigation and ESG are increasingly at the heart of investment and lending decision-making. This means the LNG project of the future will look very different as methane emissions are reduced, CCUS technology becomes more widespread, the use of renewables to power LNG facilities increases, and suppliers partner with end users to reduce Scope 3 emissions. Asia’s emerging appetite for ‘green’ LNG lends credence to this.

With lenders increasingly insisting that projects directly contribute to a net reduction in emissions, gas must directly displace coal – lowering the emissions of the wider electricity grid – rather than simply meeting future demand growth.

Future gas investment in Asia will grow in tandem with carbon prices, despite limited firm policy support for carbon pricing across the region at present.

In our AET-2 scenario, we see this changing as Asian countries move to introduce carbon prices, increasing these over time to incentivise investment in both low-carbon sources of supply and carbon removal technologies. Given that price ranges needed to support these investments are up to 10 times higher than current average global carbon prices, this is a big ask in Asia, but one that is essential to reduce carbon emissions across the gas value chain.

Combining the expected price premium for gas over oil demonstrated in April’s Horizons with carbon prices high enough to support investment in CCS accelerates the shift of capital investment towards the natural gas industry ($330bn for LNG alone). But this is predicated on securing finance – meaning a reduction in scope 1 and 2 emissions and the management of scope 3 through CCS.

Asia can underpin a new breed of gas investment

For much of developing Asia, gas is critical to combating air pollution and supporting the journey towards net zero. With calls for lenders to move away from gas investment now turning to Asia, governments and the wider gas industry must emphasise the robust demand outlook across much of the region and gas’ role in displacing coal. But this can only be achieved in tandem with huge efforts to address emissions across the gas value chain. Done right, Asia can define the next generation of gas investment.

The ‘Carbon Neutral Petro-State:’ An Oxymoron? The UAE Thinks Not