As UK leaves EU, who will emerge as winners in Europe’s gas hubs? [GGP]

They require a transparent pricing mechanism plus pipeline networks and storage sites that allow supplies to be traded and moved about at short notice. At present, the most prominent gas hubs in Europe are the ‘Title Transfer Facility’ (TTF) in the Netherlands and the ‘National Balancing Point’ (NBP) in Britain (which has now left the EU under the Withdrawal Agreement). 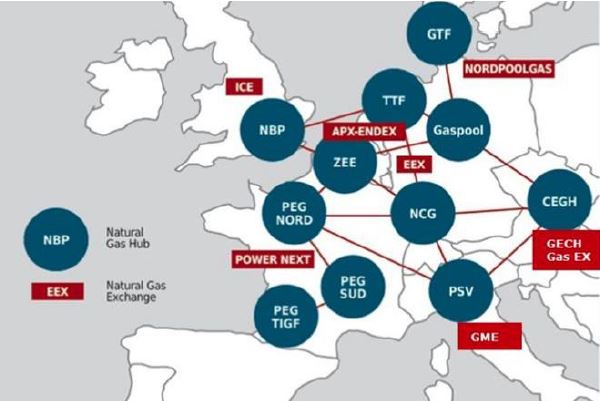 There is a great deal of uncertainty as to whether a deal can be reached between the UK and the EU to prevent a regulatory schism between the two markets before January 2021. If an agreement isn’t reached there is an opportunity for a new gas hub to emerge in Europe beside TTF, but what are the ramifications?

Gas hubs in Europe enjoy a market with a strong consumer base and competing buying interests from household, power, and industrial consumers, which have contributed to a diverse marketplace. They are at the heart of commercial gas activity, providing transparency for pricing and transactions, and due to the EU market access and regulations, entice domestic and foreign participants to trade.

The NBP and TTF have benefited from the strong consumer base that has held the European market stable, but uncertainty now looms ahead.

NBP was the first gas trading hub in Europe. The hub was suitable for the UK, but it was priced in British pence/therm. Western European users therefore were taking on an exchange rate risk when they used NBP. Gradually other trading hubs were established of which the foremost was the TTF based in the Netherlands, priced in euro, and catered for trade futures, physical and exchange trades.

The most arguable metric for gauging the prominence of NBP and TTF is the churn rate. A churn rate is the number of times a physical trade plus all its associated financial trades occur divided by the number of physical trades, effectively a liquidity indicator. The more participants trading different products in large quantities the higher the likelihood the churn rate shall be. TTF and NBP are the only two mature hubs in Europe, with a maximum 15 and 14 churn rates respectively. For a time, three gas interconnectors between the UK and Europe kept NBP and TTF hubs in line. However, market developments including LNG cargoes and pipeline gas from Russia regularly traded below contracted prices in both the UK and Europe have made the prices within NBP and TTF move apart. As it stands, Russian gas suppliers are now selling through TTF at a 30% discount where German buyers purchase it, leaving NBP in the cold.

The buyers’ market of Europe is making Russian supplies more affordable in difficult times and market orientation seems set to be fully centred on the continent and a little further east.

It could be argued TTF has superseded NBP as the main European trading hub: TTF benefits from the huge — but depleting — Groningen onshore gas field; TTF sits at the heart of continental Europe’s vast pipeline network and has LNG import capacity; the hub’s ascending prominence over NBP in churn rates emphasises NBP’s waning position; traders swapping to TTF are making sales to the UK as NBP prices appear less attractive; and TTF trades about 1.47m “lots” of 10,000 mmBTU per day — roughly $30bn per day — which is attracting more traders and creating more transparency.

By the end of 2020, the UK will end its transition period with the EU. It remains unclear how physical and financial trades will work going forward. A no-deal scenario or limited tariffs-focused trade deal with the EU could fragment an open market that first helped buoy NBP, and then TTF. In a no-deal scenario, there are uncertainties regarding what will happen to market movement and access to gas for the customer base, in the long run. 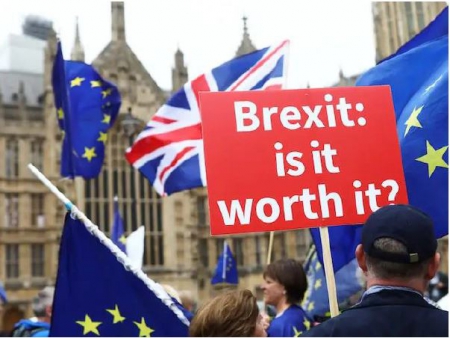 An example would be, in the case of a Norwegian pipeline going through the EU to the UK; will the transition of gas from an EEA country (Norway), through the EU’s single market to the UK (a third-party country) be subject to WTO or EU regulations? The same issue arises for two pipelines going both ways between the UK and EU. Currently there are no transfer fees and no energy agreement needed as both Norway and UK are currently within the single market.

Equally, the largest regasification plant in Europe is in Wales on Britain.

Will gas go through interconnectors in Europe with ease? What will the impact to trading gas from this plant be? If Britain does not seal a deal with the EU, the European energy market (not just EU) could see confusion and tariff introductions. Equally, increased wrangling between the UK, EU, and between Britain and individual member states could also lead to bureaucratic impediments affecting the smooth operation of gas and electricity interconnectors, particularly in the event of a harsh winter.

In any scenario, it is hard not to see NBP facing marginalisation and increasingly becoming a UK oddity, losing its relevance, price setting position, and even transparency.

The NBP was formed as a result of the liberalisation of the British gas market. A British economy existing outside the EU’s single market on 1 January 2021 deadline could be another nail in the coffin of Britain’s diminishing status as a trading nation. While NBP trades were happening with Japan and South Korea, Britain’s gas relevance is dropping. As traders turn towards TTF, and if a no-deal scenario befalls Europe, the opportunity for another hub to assume the position of NBP emerges.

The UK will have some options to develop domestic North Sea production where possible and may even turn to shale gas projects again. The EU gas market would also not be immune to such a shift but could see a noticeable strengthening of continental market hubs, but the impact on the UK economy and energy sector could be more significant.

At present landlocked countries in Europe cannot really take LNG because they don’t have ports to accept LNG shipments, but the necessary infrastructure is now being built. Poland and the Baltic nations are building terminals; Slovakia is at the receiving end of a pipeline coming through Bosnia Herzegovina and Croatia; Nord Stream 2 is arriving, and pipelines are traversing Turkey towards Europe. All these developments provide the potential for a new gas hub to reach the maturity of TTF.

While uncertainty abounds over the potential schism in 2021, there is opportunity for an expanding gas market and maturing hubs on the European continent. The duality of NBP and TTF may indeed only have lasted for as long as Britain remained in the largest, most diverse trading market globally. However, as Britain heads out on its own into the global gas market, it is prudent for the UK gas sector to expect rough seas ahead.

This article was supplied by the Abdullah bin Hamad Al-Attiyah International Foundation for Energy and Sustainable Development.