The governments of Kuwait and Saudi Arabia announced plans last month for the development of the offshore Dorra gas field, which lies in their shared Partitioned Neutral Zone (PNZ). Given their recent statements, by Kuwait in particular, about the expansion of oil and gas production from the zone, the news comes as little surprise. However, the Dorra deal has elicited an angry response from Iran, which claims a significant portion of the field that it calls Arash.

Development of the area’s shared assets has long been contentious, even between the Arab neighbours, and a resolution appears unlikely in the short-term.

State-owned Kuwait Petroleum Corp. (KPC) announced in mid-March that a deal for Dorra had been signed during a meeting between energy minister Mohammad Al Fares and his Saudi counterpart Prince Abdulaziz bin Salman.

This will see subsidiaries of KPC and Saudi Aramco – Kuwait Gulf Oil Co. (KGOC) and Aramco Gulf Oil Co. (AGOC) – work to raise gas production from Dorra to 1bn ft3/day alongside 84,000 barrels/d of condensate, with the output to be divided evenly between the two companies.

The field is estimated to hold 0.989-1.09 trillion ft3 of gas and around 300mn barrels of oil on the Kuwaiti/PNZ side. Previous development efforts to tap these reserves – which envisaged production of 600mn ft3/d – stalled in 2013. 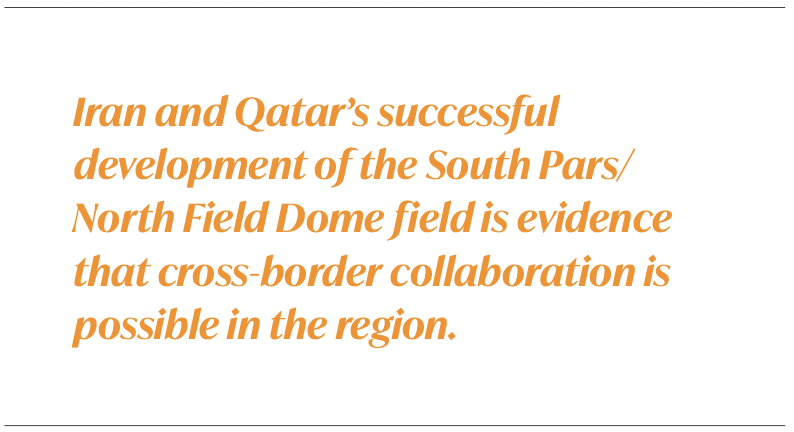 While the neighbours have been working to increase oil production from the PNZ, the Dorra announcement highlights recent moves to raise gas capture from the area. In January, a memorandum of understanding was signed by KGOC and Saudi Arabian Chevron (SAC) – Aramco’s representative in the onshore Wafra Joint Operations (WJO) area – covering the export of gas from the Wafra field, which has an oil production capacity of 250,000 b/d. Gas flows from the asset will reach 40-50mn ft3/d by mid-2022, doubling within the next four years and will be provided to KPC’s upstream subsidiary Kuwait Oil Co. (KOC).

A few months earlier, KOC reported that it had started receiving gas flows from the offshore Al-Khafji oilfield – 24mn ft3/d – following the launch of a new pipeline. Gas from both Wafra and Al-Khafji will be used in KOC’s gas networks to support electricity generation.

Only a small part of Dorra lies within the PNZ, with a larger section in Kuwaiti waters and Iran claiming around 70% of the field. However, delineation has proven a thorny issue and industry maps of the area vary significantly.

Iran estimates resources located in Arash to be around 13 trillion ft3, which were discovered in 1962.

While Kuwait appears content to share production from its section of the field with its southern neighbour, it didn’t take long for the Dorra announcement to cause ripples across the Gulf, with Iranian officials calling the move “illegal”.

Iranian foreign ministry spokesman Saeed Khatibzadeh insisted that Tehran should be involved in any effort to develop the field. “The recent move by Kuwait and Saudi Arabia within a cooperation document is illegal and goes against the ongoing procedures and the previously-held talks, having no impact on the legal status of the field and the Islamic Republic of Iran does not approve of it,” he said.

Talks were held between Iran and Kuwait in 2000 without reaching a resolution. The country’s deputy oil minister for international and commercial affairs Ahmad Asadzadeh then said that while Iran remained open to a collaborative, tripartite effort, it would proceed unilaterally in light of the decision by Kuwait and Saudi Arabia.

Asadzadeh noted that while the ministry of petroleum “expresses its readiness” to resume talks for the field’s demarcation, Iran has made the necessary preparations to go it alone. “The reason to have delayed using this shared field was pending decision in demarcation disputes with Kuwait. But given that the other side, regardless of the previous talks and unilaterally, moves to develop the field, there is no reason for delay,” he added.

This was expanded upon by the country’s oil minister Javad Owji, who said that Iran had drilled exploration wells and conducted seismic surveys, adding that “with the installation of a jacket, the drilling operation in the field will begin soon”.

Meanwhile, Kuwait’s foreign minister Sheikh Ahmad Nasser Al Mohammad Al Sabah heightened the tension further by saying that the development of Dorra was a “purely Kuwaiti-Saudi” issue, but then appeared to row back by clarifying that tripartite talks between Kuwait, Riyadh and Tehran would focus on the demarcation of the maritime boundaries of the three countries.

The decades-old disagreement over borders does little to help the already fraught relations between the Arab and Iranian regimes, but Iran and Qatar’s successful development of the South Pars/North Field Dome field is evidence that cross-border collaboration is possible in the region.

However, Iranian state media has been quick to suggest that the Dorra deal is a move to marginalise Iran from joint fields over which it holds a significant claim, alleging that its share of output from Dorra/Arash is being traded to Saudi Arabia for the Iranian share of Lulu/Esfandiar, a 500mn-barrel oilfield on the Iran/Saudi border.

Esfandiar was offered to European companies in 2015 under the integrated petroleum contract model, though a deal failed to materialise when the US withdrew from the Joint Comprehensive Plan of Action (JCPOA).

Any collaborative effort for shared fields appears to be some way off, though talks have taken place in recent months with a view to improving ties between Iran and its southern neighbours, and there may yet be hope for progress. Apparently intent on facilitating better relations, Sabah this week invited Iranian Foreign Minister Hossein Amirabdollahian for talks in Kuwait, seeking to reach terms on the maritime border.

However, the distrust that exists, particularly between Saudi and Iran, amid the continued proxy conflict in Yemen and six years without any official relations, suggests that agreement may prove elusive.

Deploying capital where it counts [Gas in Transition]