India’s domestic gas production has been in a sorry state for years. With output falling for more than a decade as legacy fields decline, India’s modest upstream prospectivity and challenging E&P regime have proven stubborn deterrents to new investment. And even as India’s gas demand has surged, the country’s notoriously byzantine business environment and more attractive opportunities elsewhere mean India’s upstream sector has remained firmly off the radar for many.

This has proven to be good news for LNG. As domestic production has stalled, LNG imports have filled the gap. In 2020, LNG demand increased by around 14% to reach 25.7 Mt, with India climbing the ranks of the world’s most important LNG markets. Last year’s low traded LNG prices saw India import over 9 Mt of spot LNG as the country’s notoriously price-sensitive buyers came in from the cold.

But this story is changing rapidly. After years of slow progress, the Reliance and BP deepwater KG-D6 fields are coming onstream, bringing over 900 mmcfd into the market from its three phases combined and set to provide over a quarter of India’s total gas output by 2025. With further supply from ONGC and Vedanta soon to come onstream and rising coal bed methane output, India’s domestic gas sector now looks in rude health.

Supporting this has been changes in government policy across gas pricing, marketing, and pipeline tariffs. And with rising LNG prices continuing to push up domestic ceiling prices, upstream players are now looking at returns that would have been unimaginable just 12 months ago. Last week’s bill in the Indian parliament to shelve a 2012 retrospective tax that led to a damaging dispute with Cairn Energy is being touted by the government as an important step to repair damage done to India’s reputation as an investment destination.

At this point a reality check is needed. Beyond those projects now onstream and under-development, India’s pipeline of pre-FID domestic gas supply is perilously thin; the current surge in supply is a short-term story at best. Huge challenges remain, both sub-surface and above-ground, and meeting India’s future growth in gas demand looks increasingly to be about LNG.

To understand the changing outlook for India’s gas sector I turned to my colleagues Alay Patel and Vidur Singhal from our India research team.

Credit must be given to the Indian government for its efforts to reform the domestic gas sector – a case of better late than never after years of under-investment. With the KG-D6 deepwater projects ramping up and new output from onshore blocks in Rajasthan and coal bed methane projects, India’s gas producers are reversing years of decline. Understanding this success is in large part linked to three key factors: improved domestic gas marketing policies, competitive domestic pricing reforms and a simplified pipeline tariff mechanism. 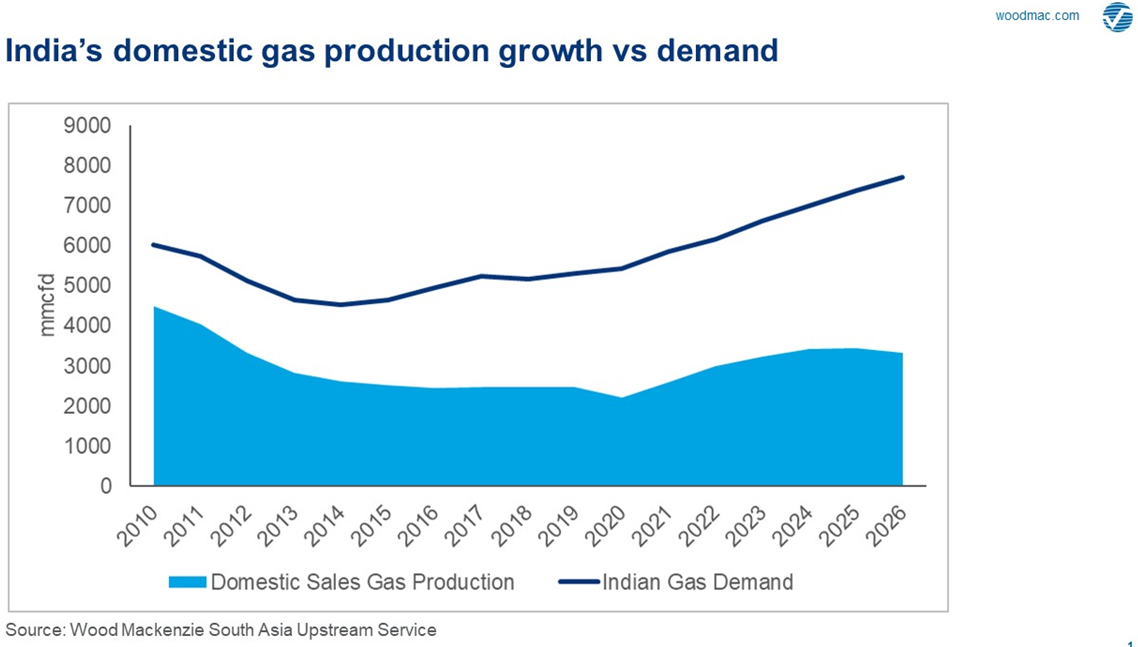 A critical step has been allowing producers to freely market their gas, removing previous restrictions on how companies sold gas from production sharing contracts and opening up a far wider pool of potential buyers. The establishment of an online platform for auctioning gas is simultaneously providing buyers with greater transparency in their purchases.

A second positive development is pricing policies for domestic gas intended to keep supply competitive against spot LNG or crude oil benchmarks. While suppliers now have greater freedom in which formula they use to price gas, this must be at the lower of the existing “ceiling price” or the formula-based price for the deepwater projects operated by Reliance and ONGC. With low spot LNG prices through 2020, domestic sales prices were close to average breakeven costs for new supply. But as spot LNG and crude prices have risen, we now expect ceiling prices will increase to over US$9/mmbtu by Q2 2022, putting India’s gas producers firmly in the money.

Finally, competition against imports is set to be improved by a new pipeline tariff policy that should see buyers charged fixed tariffs based on distance, benefitting remote customers located further away from supply sources. If implemented, the reform will allow end-users in India’s western states buying KG-D6 deepwater gas from offshore eastern India to replace expensive spot LNG purchases with cheaper domestic gas.

Short-term pain for LNG, but the longer-term outlook remains positive

This is creating headwinds for Indian LNG demand. And while fears of significant reductions in LNG demand have yet to materialise with demand through May/June close to record levels, looking forward the growth in domestic gas production is set to reduce LNG demand into the fertiliser sector. In addition, rising global spot prices are making LNG uncompetitive in the power sector, painting a more bearish picture for Indian LNG demand over the next few years.

This is a concern for the LNG industry. An under-performing domestic gas production sector and strong growth in gas demand has long made India critical to future LNG demand projections. Indeed, India’s future appetite for LNG is one of the key drivers underpinning our bullish outlook for global LNG demand and future supply investment.

But any concerns should be quickly assuaged. While the current boom in domestic gas production will derail LNG demand growth in the short-term, the lack of significant pre-FID domestic supply and no discoveries of note in blocks awarded under the OALP rounds should ensure that beyond 2024 India’s LNG demand roars back. We expect LNG demand to grow by around 5% annually between 2024-2030, reaching almost 37 Mtpa by this time – a reassuring outlook for the multiple project developers looking to India as a critical growth market.

APAC Energy Buzz is a weekly blog by Wood Mackenzie Asia Pacific Vice Chair, Gavin Thompson. In his blog, Gavin shares the sights and sounds of what’s trending in the region and what’s weighing on business leaders’ minds.