Albania’s ambitions to enhance the role of natural gas in its economy may finally be gaining traction, but in the face of growing opposition to the cleanest fossil fuel, it may be too early yet to say what – if any – progress might be made.

The small Balkan state relies heavily on hydroelectricity for its power, with more than 2,100 MW of dams in operation. And while this energy source certainly is clean, it can also be unreliable. Droughts in 2017 led the country to import as much as 80% of its power, at considerable expense.

Albania currently produces only minimal amounts of wind and solar energy, and the government is eager to scale these sectors up, to harness more of an estimated 7 GW of potential. There have been several recent milestones. The country held its first solar tender for a 100-MW facility last year, and launched the first tender for wind generation this summer. But solar and wind power will not provide the baseload capacity needed to offset fluctuating hydroelectric output. 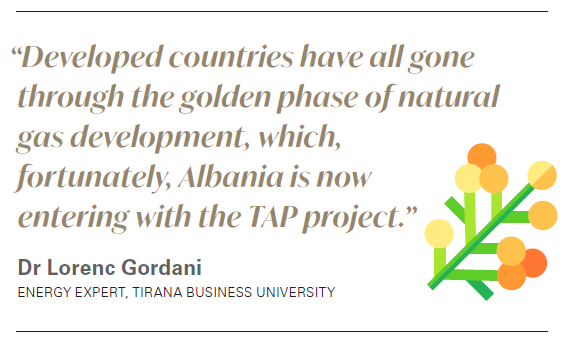 The government has therefore turned to natural gas, but first Albania must develop the necessary infrastructure.

Albania, one of the world's oldest oil producers, once produced a fair amount of gas of its own, with supply peaking at 1bn m3 in the mid 1980s. It has since fallen to an almost negligible level, however. A relic of this period, the country has a domestic gas grid some 400 km in size, although some of it is now inoperable. The country has a 100-MW thermal power plant in the port of Vlora that can run on both gas and oil. But though completed back in 2009, it remains offline because of technical faults in its design.

Critically, Albania lacks any pipeline connections with its neighbours, let alone regasification capacity, to import gas. And for years, efforts to establish these links have floundered. As of late last year, though, Albania serves as a key gas transit route. The Trans-Adriatic Pipeline (TAP) was declared ready to operate last November and began flowing gas across Albanian territory for onward delivery to Italy at the end of 2020.

Albania lacks the infrastructure to take any gas from TAP, and even if it did, the pipeline's 10bn m3/year capacity is fully reserved by buyers in Italy, which have agreed to take 8bn m3/yr, and in Bulgaria and Greece, which will each receive 1bn m3/yr. Nevertheless, authorities in Tirana are hopeful that TAP's launch will help kickstart Albania's own gas programme.

The pipeline’s commissioning was followed by a preliminary agreement in March between Albania’s government, US oil major ExxonMobil and US LNG vessel operator Excelerate Energy to assess the construction of a regasification terminal. The proposed terminal would be sited in Vlora, and the partners agreed to study the recommissioning and potential expansion of the nearby Vlora power plant, as well as evaluate prospects for small-scale LNG supply. Small-scale LNG supply can be viewed as a favourable option in countries like Albania that lack a developed pipeline grid.

Results from the studies are expected in the third quarter of 2021, while the LNG import terminal itself could be up and running as early as 2023, pending an investment decision.

Then in July, Excelerate, Italian engineering group Snam and state-owned Albgaz agreed to co-operate on the potential building of a gas pipeline from the proposed Vlora terminal to other possible gas infrastructure in Albania. They will also look at developing underground gas storage.

Later that month, the consortium operating TAP agreed terms with Albania’s energy ministry on the development of a delivery point at Fier that would allow the country to access the pipeline’s gas. But the group did not disclose when it envisaged the facility’s completion, or at what cost.

Even so, Albanian prime minister Edi Rama proclaimed the agreement could pave the way for the country’s eventually transformation “practically into a net exporter of energy,” by “introducing gas as another component into the economic and social life of the country.”

It is unclear whether Albania could access any gas without TAP having to undergo an expansion. TAP this summer held a binding market test for potentially increasing the pipeline’s capacity to 14.4bn m3/yr, 17.1bn m3/yr or 20bn m3/yr by as early as 2026. But no bids were received. And in any case, capacity was notably only offered at delivery points in Greece and Italy and not in Albania.

Meanwhile, public consultations were launched in June on the long-planned Ionian-Adriatic Pipeline (IAP), which would run from Fier in Albania through Montenegro and Bosnia to Croatia, where an LNG import terminal began operations at the start of this year. It is one of a number of pipelines either planned or under construction in the Balkans, aimed at uniting the region’s fragmented energy markets.

In Albania, IAP will form the backbone of the northern part of the Albanian gas transmission system, Dr Lorenc Gordani, energy expert at the Tirana Business University, tells NGW. It will also facilitate gas supply to Kosovo through the proposed Alkogap pipeline, which has a projected cost of €215mn ($254mn).

Gordani believes Albania’s focus on gas will support its industrial and general economic development, noting that the country’s low energy consumption per capita leaves significant room for growth. Gas will provide for this growth and help balance Albania’s volatile energy system, especially as more wind and solar projects are rolled out, he says.

“Developed countries have all gone through the golden phase of natural gas development, which, fortunately, Albania is now entering with the TAP project,” Gordani explains. Along with alternative supply options like US LNG, TAP’s gas would help ensure the reliability of the country’s energy system and complement other sources including wind and solar.

Albania’s government envisages 720 MW of operational gas-fired power generation by 2028, estimating that these plants will constitute 42% of the country’s total gas demand by the end of the decade. Besides the station in Vlora, Austrian firm IVI-COM has proposed building a 480-MW combined cycle gas turbine plant in Korca. Some 25% of demand will be in the services sector, while housing and industry will account for about 12%.

Gordani pointed to several reasons for Albania’s failure so far in developing a gas market. For one, the country’s power generation is dominated by handful of incumbents that limit competition, and reforms to bring the market in line with EU norms are incomplete. There is also a lack of sound and up-to-date studies, the expert notes. Albania’s National Gas Master Plan, for example, is now four years old and will have to be revised.