Aiming to capitalise on the fast-growing Indian market, Singapore-based AG&P will be investing $1.5bn in gas and LNG infrastructure in the south Asian nation over the next eight years. The company will be pumping money into its Karaikal LNG import terminal in southeast India and city gas distribution networks in the states of Rajasthan, Tamil Nadu, Kerala, Karnataka and Andhra Pradesh, where it will build more than 1,500 compressed natural gas (CNG) stations and lay more than 17,000 km of steel pipelines. This network will connect more than 10mn households to natural gas. 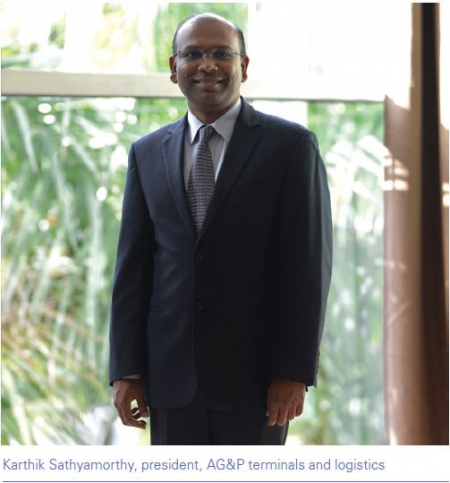 “We established ourselves as a serious player in the market in 2017, when we identified Karaikal Port as a strategic location for an LNG import terminal to serve customers in southeast India – an area where access to natural gas is limited by a lack of the requisite infrastructure,” said the president of the LNG terminals & logistics business, Karthik Sathyamorthy. “We further expanded our participation in the sector in 2018 and 2019 by bidding selectively for city gas distribution licences issued by the Petroleum & Natural Gas Regulatory Board (PNGRB), predominantly focusing on the south of the country and which could be served by our import terminal.”

It clear why AG&P has chosen to inject significant capital into India. It expects gas consumption to increase by 150% over the next 10 years from 167mn m3/day to 420mn m3/day by 2030. This demand is being driven primarily by the government’s two-fold aim of increasing the contribution of natural gas to 15% of the total energy mix by 2030 and making gas more widely available for day-to-day consumption, the company said. The bulk of the demand will come from the power sector and from the city gas distribution operations being rolled out across the country.

“The city gas distribution sector in fact is expected to grow by 350% over the next 10 years, with a ten-fold increase projected for domestic use; and 150% increase in compressed natural gas-powered vehicles, which will be served by 10,000 CNG stations. AG&P will own and operate more than 1,500 of these stations,” said Sathyamorthy.

AG&P holds exclusive licences for city gas distribution in 28 districts in 12 areas in India, covering 277,000 km2 or roughly 8% of the country. The PNGRB awarded these licences during the 9th and 10th rounds of bidding in 2018 and 2019, respectively.

According to the company, construction is underway in the Tamil Nadu and Rajasthan. AG&P expects that the total demand from its city gas distribution network to be about 2.8mn metric tons/year by 2028 in LNG equivalent, out of which around 1mn mt/yr will be served by imported LNG, while the rest will be from domestic gas. “Transport and industries will lead the demand growth,” said Sathyamorthy.

In February, AG&P broke ground on the Karaikal terminal project and it expects to start commercial operation in Q4 2021. The import terminal, with an initial capacity of 1mn mt/yr, will provide regasified LNG to power plants, industrial and commercial customers within a 300-km radius, including customers along an existing pipeline network near the terminal and multiple power plants totalling 800 MW capacity. This catchment area includes automobile, chemical, fertiliser, glass, steel, ceramics, food and pharmaceutical factories, as well as major commercial centres. In addition, Karaikal LNG will serve the city gas networks of AG&P, including other city gas companies that will bring CNG and LNG to vehicles and piped natural gas to households and other users. AG&P declined to provide specific details regarding its customer agreements as they are confidential.

AG&P is also in advanced discussions with various entities for supply of LNG. “Our supply for the Karaikal LNG terminal will come from a mix of spot market and long-term LNG supply contracts. Until commercial operations commence in late 2021, AG&P will buy LNG for its city gas business on a truck-by-truck basis from existing terminals in India,” Sathyamorthy said.

The Karaikal terminal combines a floating storage unit (FSU) leased through a long-term charter agreement with Adnoc Logistics and Services from 2021; and Gas Entec’s Regastainer – a modular plug-and-play regasification technology that will be deployed onshore. Gas Entec is controlled by AG&P. Adnoc is a partner of AG&P and has eight such “old ladies” in total.

“From a cost perspective, this model reduces upfront capex and minimises the need for costly onshore infrastructure or FSRU solutions. From a supply-demand perspective, the arrangement offers a flexible solution that can easily meet smaller market demand initially but can be scaled up as demand increases,” Sathyamorthy added.

AG&P also plans to build a truck-loading facility to serve remote customers. It has started to acquire its own fleet of LNG trucks, which will start operations this quarter. The fleet will scale up in line with demand and will deliver gas to remote and smaller customers using the Karaikal LNG terminal once it is operational in 2021; and other terminals in the interim. The terminal will initially have four truck-loading bays and will then be increased in phases, the company said. AG&P plans to expand the capacity of the terminal to 3mn mt/yr in the medium term as demand increases.

With global LNG market in surplus and prices at multi-year lows, India’s imports have seen double digital growth and will be at a record when the current financial year ends on March 31, 2020 (fiscal 2019-2020). India’s LNG imports increased for the 11th month in a row in January, arriving at 2.77bn m3 (2.04mn mt), up 25% yr/yr, according to the latest data published by the Indian oil and gas ministry's Petroleum Planning and Analysis Cell. In the 10 months of the current financial year, imports totalled 27.43bn m³ (20.3mn mt), up 13% yr/yr. With two months still to go, imports have already surpassed the previous financial year’s (2018-2019) figures of 27bn m³ of pipeline-equivalent LNG.

K Ravichandran, senior vice president at rating agency Icra, believes LNG imports will continue to see strong growth. “Most of this incremental demand is coming from city gas distribution and refineries sector. Icra expects LNG demand to see a growth of 15%-18% for the full year 2019-2020 vs 2018-2019,” he said. For the next fiscal year, Ravichandran expects India’s LNG import growth to be about 10%-12%, as prices are expected to remain low.

Although underlying demand for imported gas remains very strong in India at the current prices, infrastructure issues, especially lack of pipelines, may restrict India ability to ramp up imports as fast as the government would like.

“As of now, Petronet’s Dahej terminal is fully utilised. Shell’s Hazira terminal has also been seeing heightened utilisation, while the Kochi, Dabhol and Ennore terminals are significantly underutilised due to either ‘last-mile’ issues or breakwater issues. Going ahead, Mundra and Jaigarh terminals should come on line, which will give some breathing space for LNG importers. Since we are talking about only 10%-12% growth in the next fiscal year, with the available and anticipated infrastructure growth, we should be able to achieve these volumes,” Ravichandran said.

At present, India has five fully operational terminals, with Mundra, the sixth, having received its commissioning cargo in January this year. The 5mn mt/yr terminal at Mundra was developed by GSPC LNG, a joint venture between Gujarat state-owned GSPC and private sector firm Adani. These six terminals have a combined capacity of 42.5mn mt/yr. The Jaigarh floating terminal, with a capacity of 4mn mt/yr operated by H-Energy, is also expected to be commissioned soon.

Infrastructure may be a challenge for India in the short-term but in the medium to long-term the country is likely to see substantial build-up in national pipeline grid, city gas networks and regasification capacity, giving a boost to gas demand and LNG imports as domestic supply is expected to remain muted.

Apart from the Jaigarh floating terminal, there are four more terminals which are expected to come online in the next few years – AG&P’s Karaikal terminal; Adani’s Dhamra terminal; Swan Energy’s Jaffarabad floating terminal and Shapoorji Pallonji’s Chhara terminal. These four will add 25mn mt/yr of regasification capacity, taking India’s overall capacity over 65mn mt/yr in the next two to three years.

India’s 16,770-km gas pipeline grid is also seeing some much-needed expansion. State-run Gail is building the 2,650 km-long JHBDPL project, also known as Pradhan Mantri Urja Ganga passing through the eastern Indian states of Uttar Pradesh, Bihar, Jharkhand, West Bengal and Odisha. The pipeline is further being extended from Baruani (Bihar) to Guwahati (Assam) with a length of some 730 km which will be a gateway for pipeline infrastructure in the north-eastern region of India. Gail’s much-delayed Kochi-Mangalore gas pipeline in south India is also reaching completion. This comes as good news for Petronet LNG’s much underused Kochi import terminal.

“Establishing a national framework to support the uptake of natural gas is a crucial step for India to realise its ambition of becoming a gas-based economy. The country has already taken major steps towards achieving this target through the city gas distribution bidding process managed by the government’s PNGRB. Policy settings are also being established to ensure that natural gas remains commercially attractive,” Sathyamorthy said.

Sathyamorthy said that in addition to focusing on building infrastructure, attention also needs to be paid on taking gas into wider areas of the economy.

“The power and fertilizer sectors have been the country’s two anchor gas customers. But if India is to achieve a gas-based economy, consumption must expand to wider industry, transport, and households. This is now being addressed through the recent country wide city gas development,” he said.