This is one of the more absurd policy suggestions that we’ve seen since the coronavirus began eating away at oil prices, which were dramatically exacerbated by an ill-timed Saudi-Russia oil price war.

Saudi Arabia is the world’s low-cost producer, spending less than $8 per barrel to produce oil. It is hard to see how the kingdom might gain from an alliance with American oil producers, champions (until recently) of free markets but whose production costs are three or four times as much per barrel, and who have been gaining market share while Saudi’s has stagnated.

But let’s take a look anyway.

The US proposals call for Saudi Arabia to leave OPEC, the organization it helped establish in 1960. Research shows OPEC’s cuts are a stabilizing force in volatile oil markets, albeit bringing higher prices than would otherwise be the case. Until the 1970s, by the way, the same role was played by the Texas Railroad Commission.

The problem with OPEC this time around is not that it is raising oil prices, but that it has made oil too cheap and rendered American oil companies uncompetitive.

The thing is, OPEC’s actions are the very reason the US shale sector has been so successful in the first place. Without OPEC constraining oil production and keeping prices artificially high – and without the Saudis slow-walking the monetization of their own massive reserves – US shale oil production would be far smaller than it is today.

Yes, the dramatic increase in US production is based on a revolution in technology and a robust American oil sector, along with institutions like private ownership of mineral rights.

But US shale production is also based on high oil prices.

Until a few weeks ago, those high oil prices were the result of continued global demand growth and a manipulated market—about 1.7mbd in production cuts made by OPEC and non-OPEC producers led by Russia.

This group of two dozen producers began cutting back in 2016 in a move that turned out to be an unintended charitable contribution to American shale producers, who responded by ramping up production from about 8 million barrels a day (mbd) in 2014 to 13 mbd in 2020. (Fig. 1) 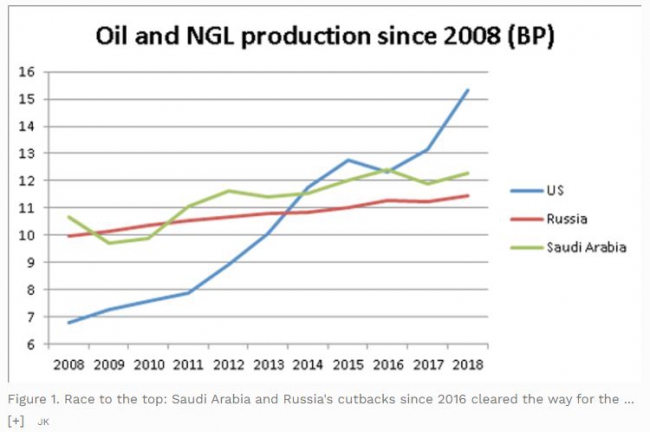 Since American producers assumed no responsibility for balancing oil markets by moderating their production, their actions are rightly described as “free riding” on sacrifices made by others – namely, OPEC and its non-OPEC partners.

Naturally, OPEC producers were not amused. Neither were the Russians, particularly Rosneft CEO Igor Sechin, who was not only sacrificing his company’s output to subsidize American producers, but who had been personally sanctioned by the Trump administration.

An industry that can only succeed by free-riding on the sacrifices of competitors is not, at the end of the day, sustainable.

The vitriolic letter from the six Republican senators reveals no understanding of the precarious balance of the US shale industry. Instead it is blames Saudi Arabia for the crisis and threatens the kingdom for undermining what the senators describe as “our nation’s energy dominance.”

To help stabilize the oil market—which after all is a global marketplace—rather than imposing sanctions or tariffs on Saudi Arabia or counterproductively trying to get the Saudis to leave OPEC, it might make more sense for US producers to actually join OPEC in sharing in the burden of managing the market, rather than free-riding on its sacrifices.

As it turns out, at least one US oil firm and a member of the Texas Railroad Commission has begun investigating just that, though the regulator’s chairman opposes such an action. While the Railroad Commission used to enforce cuts and acted as an OPEC-style market balancer until the 1970s, we’re not sure how reprising such actions would stand with the free-market principles of the US industry and US anti-trust laws.

An easier way to impose a temporary US cut would be to impose a Texas-wide—or, better yet, nationwide—ban on flaring and venting.

Texas producers alone are emitting more CO2 through waste (12.6 million metric tons/year) than the all the CO2 emitted by Texas households combined (10.8 MM t/y), or Massachusetts’ entire electricity sector (10.7 MM t/y), according to US government data.

A ban would force a few of the less efficient operators to shut in production until they could properly capture and market that gas.

The other part of the US proposal calls for a US-Saudi oil alliance. How might that work? Would the Saudis somehow find a new way to subsidize American oil? The OPEC system already does a good job of this.

The six Republican senators initially appeal to Saudi Arabia to abandon OPEC due to the “burden” of “free riders.” As mentioned, the United States is the largest of these by far.

But they call for Riyadh to “leave the antique OPEC cartel immediately and join the United States on the global stage as a free market energy powerhouse.”

If Saudi Arabia abandoned OPEC, stopped restraining its oil production, and became a “free market powerhouse,” what might happen?

First, the price of oil would fall, or rather stay at current low levels, which would hamper efforts to revive US shale sector.

Second, the Saudis would take a larger, more proportionate share of the market, including the share currently held by the US and Canada and other high-cost producers.

Third, a lot of countries around the world that require high oil prices to balance their budgets – including Saudi Arabia itself – would find themselves in trouble. For this reason alone, $20 oil looks unsustainable, as does the Saudi-Russia price war…but we all know what Keynes said about the long run.

Finally, all that cheap oil would incentivize growth in demand for oil and a new price equilibrium would eventually be reached, but at a massive cost to climate action. Cheap oil would make it harder for clean tech solutions and oil substitutes to compete, and incentivize consumers to buy even bigger vehicles, and emit even more carbon dioxide and pollutants.

In short, very little good would come of this.

Saudi Arabia might be convinced to invest in the US oil industry, as it has recently in Russia.  But Saudi Arabia has been a player in the US for many years—its state oil company Saudi Aramco owns the largest US refinery and is building a US petrochemical plant. Given the huge dollar amounts needed to sustain shale investment at current scale, any Saudi investment would be a drop in the bucket.

All that said, there is one reason why the idea of a US-Saudi alliance might kindle some interest in Riyadh. Saudi Arabia is desperate to retain the security protection Washington provides which helps it thrive in a tough region. Some thinkers in Washington are calling for downsizing this presence.

It’s possible the Saudis would consider a “subsidizing” oil relationship with the United States, if it came with formal security guarantees, such as placing the kingdom under the US nuclear umbrella, if Iran succeeds in developing a nuclear weapon.

But unless there is a substantial quid pro quo – a major concession from the United States – it would make no sense for the Saudis to unilaterally assume the role of supporting oil output of a competing producer.

Jim Krane is the Wallace S. Wilson Fellow for Energy Studies at Rice University’s Baker Institute, and the author of the recent book Energy Kingdoms.

Mark Finley is the Fellow in Energy and Global Oil at the Baker Institute. Before joining the Baker Institute, Finley was the senior U.S. economist at BP. For 12 years, he led the production of the BP Statistical Review of World Energy, the world’s longest-running compilation of objective global energy data.