A gas boom is coming in the US; A closer look at Haynesville and Appalachia reveals records and a risk

Natural gas production in the US is set to grow to a new record in 2022, at 93.3 billion cubic feet per day (Bcfd) and will continue to rise further, exceeding 100 Bcfd in 2024, a Rystad Energy analysis shows. As a result, the performance of the country’s key gas basins is going to attract increased interest from investors and markets, with CO2 emissions intensity, capital efficiency and potential bottlenecks drawing close scrutiny.

The country’s output reached a record in 2019, at 92.1 Bcfd, but production declined subsequently to 90.8 Bcfd in 2020 as a result of the Covid-19 pandemic. Rystad Energy expects that 2021 volumes will fall even further, to 89.7 Bcfd but the trend will quickly change as the effect of the pandemic subsides and activity builds up across the country’s major gas basins.

Rystad Energy’s analysis reveals that the Appalachian Basin was US’ best-in-class in 2020 when it comes to CO2 emissions intensity, and the region is set to report a record-high capital efficiency in 2021, as reinvestment to maintain output will drop to its lowest ever. Meanwhile, the Haynesville play will offer the largest gas output growth going forward, risking bottlenecks unless more pipelines are approved. 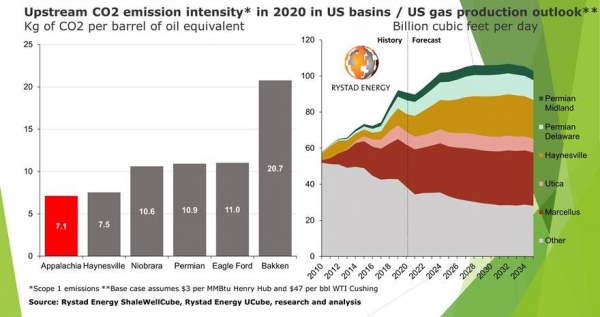 Looking at CO2 emissions intensity, as the Appalachian region enjoys well established and relatively modern infrastructure, and with the considerable adoption of e-frac fleets, Rystad Energy’s Scope 1 upstream emissions analysis shows it is the top region in the US, with 7.1 kg of CO2 per barrel of oil equivalent (boe) in 2020.

“Such a level of CO2 intensity performance brings Appalachia to the top quartile among all oil and gas fields globally. As the basin becomes more mature and modern ESG best practices are implemented, we anticipate Appalachia to improve further in its CO2 intensity dimension in the next three to four years,” says Emily McClain, senior analyst at Rystad Energy.

Producers active in the Appalachian region also have another reason to be proud of: 2021 will see   capital efficiency levels rise to a record high, Rystad Energy projects, a trend that will continue in the years to come. To maintain their production, Appalachian producers will need an upstream reinvestment rate of only 67% in 2021.

While the biggest public independents in the region have historically managed to lock in relatively favorable derivatives positions, 2016 was the only year when the basin was able to deliver an upstream reinvestment rate of under 100%, excluding the impact of hedging, financing activities and midstream-related cash flows, according to our estimates.

Else, despite the ever-present infrastructure bottlenecks, recent pipeline delays and project cancellations amid exploration and production companies’ changing business model, total gas production in the Appalachia has yet to reach its peak. In our base case scenario we still anticipate a growth of about 16% in Appalachian gas production before a final plateau is reached, with the Marcellus and Utica forecast to add 5 Bcfd over the next two decades.

However, the overall region’s contribution to the nation’s total will stay flat, at 36% in 2035 compared to 2021, as the Permian and Haynesville drive most of the incremental growth. Nevertheless, Appalachia will continue to remain the dominant supplier given its significant inventory of remaining drilling locations.

The Haynesville is set to become the largest source of gas output growth in the US, forecast to add about 10 Bcfd from 2020 to 2035, growing by 86% during that timeframe. The region is forecast to account for about 21% of the country’s gas production in 2035, compared to 13% in 2020.

It remains poised to see a production growth of 5 Bcfd or more over the next five years based on a conservative level of drilling on the back of robust permitting activity, an expanding inventory of commercial locations that includes East Texas and the mid-Bossier and improving 2-month initial production results, Rystad Energy estimates.

A key factor in Haynesville’s ability to sustain an advantage against the Appalachian region will be to maintain the relative ease with which operators can transport gas from wellheads to Gulf coast markets, compared to the bottlenecks and mid-stream project cancellations that producers in the Northeast have to grapple with.

Our analysis on Haynesville’s current and planned takeaway capacity concludes that the basin has the capacity to sustain the forecast production growth up to 2024, the year when potential bottlenecks could start, unless new pipeline projects get approved.

As Haynesville’s second growth phase began and operators returned to the previous record production numbers from the first boom in late-2019, the system touched the key 90% level of utilization, above which it may come under strain with bottlenecks occurring. The LEAP, Index 99, and the CJ Express pipelines have since alleviated these potential strains, with utilization rates currently back near 70%.

Our analysis visualizes several different scenarios that the system may face over the coming years. Under a scenario in which all new projects are approved, constructed, and are brought online, and the Mid-Con stays at its currently forecast low levels, the system will stay at a level comfortably under 90% well into the medium term, providing sufficient capacity for a booming third growth phase.

However, if planned projects under review, including two Tellurian pipelines that are currently deferred are ultimately not built and only Gulf Run’s additional 1.65 Bcfd in capacity is added, the system would touch an utilization rate of near 90% by the fourth quarter of 2024 and additional projects would be needed to continue growth into the second half of the decade. If Gulf Run ultimately does not receive FERC approval, then the system would return to an unsustainable level of use by the second quarter of 2024.

Lastly, if none of these projects ultimately are added to the basin’s capacity and gas production in the Mid-Con returns to the historical peaks last seen in 2019, then our analysis concludes that, under current production forecasts, the basin’s pipeline capacity would not just hit the 90% mark, but also fully become overutilized by 2024.

Output growth in other basins

Rystad Energy also forecasts significant growth in gas volumes from tight oil plays. Associated gas from the Permian’s Delaware and Midland regions will account for more than 5 Bcfd of growth from 2021 to 2035, driven primarily by the Delaware. The US is forecast to supply almost 80% of North America’s total gas production, supported by these increases.

For more analysis, insights and reports, clients and non-clients can apply for access to Rystad Energy’s Free Solutions and get a taste of our data and analytics universe.