Published later than usual, in September rather than February, the UK major BP’s Energy Outlook 2020 does not only manage thereby to cover the Covid-19 pandemic on future energy demand and supply. It also provides a backdrop to the new CEO Bernard Looney’s deliberately radical reinvention of the international oil company into an international energy company.

EO 2020 investigates possible paths for the global energy transition: how global energy markets may evolve in the period to 2050; and the key ‎uncertainties that may shape them. BP states that it does not provide forecasts – chief economist Spencer Dale made it as clear as he could that the reality would turn out different – but it is to help the reader understand the scale of the uncertainty that the move to decarbonise has created.

BP says the world is on an unsustainable path and the scenarios show that achieving a rapid and ‎sustained fall in carbon emissions is likely to require a series of policy measures, led by a ‎significant increase in carbon prices. These polices will need to be further reinforced by shifts ‎in societal behaviours and preferences – something which is proving to be a big challenge, especially in Asia. BP says that delaying these policies, measures and societal shifts ‎may multiply the challenge, so creating significant additional ‎economic costs and disruption.

In his introduction, Looney says that how the global energy system will change out to 2050 will be driven by three key factors:

He added that EO 2020 was instrumental in BP’s strategy, announced in August, that is based on achieving net zero by or before 2050. 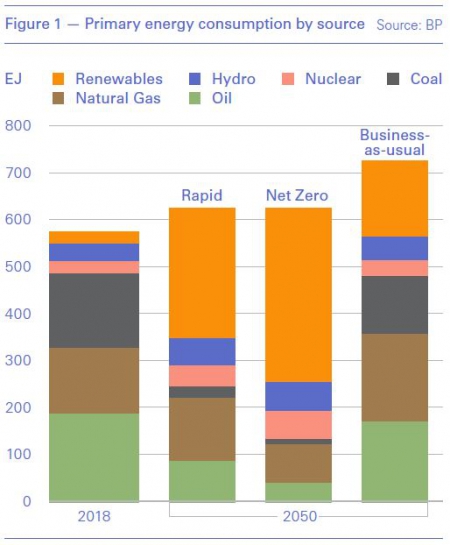 Primary energy demand increases by about 10% in Rapid and Net Zero and by about 25% in BAU over the period to 2050, driven by increasing levels of prosperity in emerging economies (Figure 1) .

Predictably, in Rapid and Net Zero the contribution from renewable energy grows rapidly – from 5% in 2018 to 45% and 60% respectively in 2050 – at the expense of fossil fuels.

The scale of the economic cost and disruption caused by Covid-19 is likely to have a significant and persistent impact on the global economy and energy system. It will cause lasting behavioural changes affecting work, leisure and travel. This could potentially reduce primary energy demand in Rapid by 3%-8% by 2050.

The growth of energy used in transportation slows, with oil peaking in mid-to-late 2020s in BAU(Figure 2).

In BAU oil consumption sees only a small reduction by 2050, but the drop in Rapid and Net Zero is pronounced: down to about 50mn b/d and 40mn b/d respectively. This is due to electrification and better fuel efficiency.

Global coal demand declines consistently over the next 30 years in all three scenarios, particularly in Rapid and Net Zero (Figure 1). 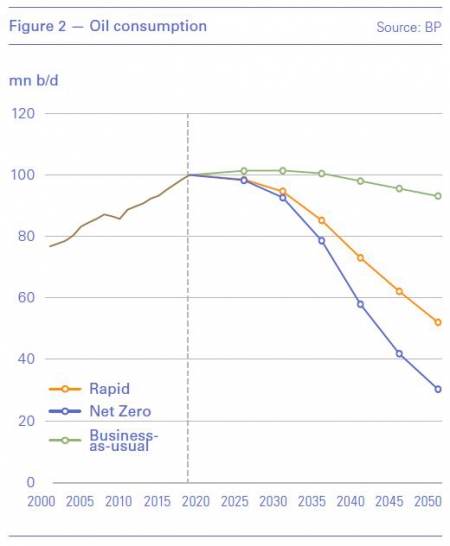 Growth in global energy demand comes entirely from more prosperous emerging economies with better access to energy (Figure 3). This far outweighs the drop in energy consumption in the developed world which is brought about mainly by energy efficiency gains. The emerging world accounts for around 70% of energy demand in all three scenarios by 2050, up from around 58% in 2018.

In 2018, the average person in the developed world used more than three times more than his counterpart in emerging economies. At the extremes, an average US citizen used 12 times more energy than an Indian. As populations expand and grow richer, this gap narrows, affecting global energy demand.

Covid-19 however is leading to deglobalisation. The disruptions associated with this, together with the increase in trade disputes and sanctions in recent years, are leading to rising concerns about energy security – particularly countries that import much of their oil and gas. 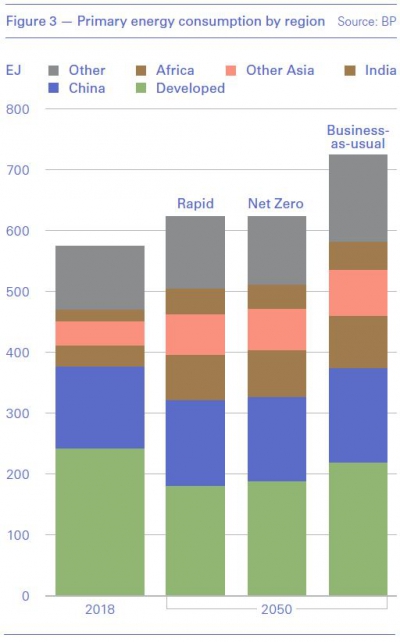 In response to this, countries are trying to rely less on imported goods and services, giving priority instead to domestic energy resources. This includes all fuels, including coal.

Natural gas is more resilient than either coal or oil, owing to its broad-based demand and the increasing availability of global supplies (Figure 4).

In Rapid, global gas demand, including biomethane, grows over the next 15 years, driven primarily by economies in developing Asia switching away from coal towards lower-carbon fuels. Global gas consumption declines in the subsequent 15 years as coal switching fades, compounded by increasing falls in the developed world, falling back close to 2018 levels at around 4 trillion m³. 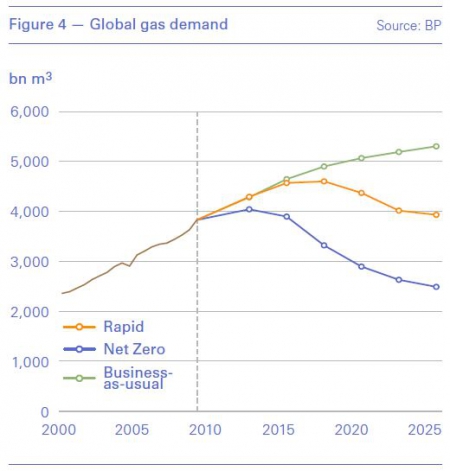 In contrast, gas demand increases throughout the next 30 years in BAU, increasing by a third to around 5.3 trillion m³ by 2050. This growth in gas demand is relatively widespread, with particularly strong increases across developing Asia, Africa and the Middle East.

US, Middle East and Africa supply most of the extra energy needed in BAU: their rising output together accounts for around two-thirds of the incremental supply.

In addition to supporting a shift away from coal, natural gas has a role to play as a source of near zero-carbon power when combined with CCUS, either as a direct source of energy to the power and industrial sectors or to produce blue hydrogen, provided prices remain competitive.

This fast growth is driven by increasing gas demand in developing Asia as gas is used to aid the switch away from coal and LNG imports are the main source of incremental supply. US, Africa, Russia and the Middle East meet most of the demand surge, driven by low prices, and they emerge as the main LNG exporters. Deglobalisation would, of course, impact this.

But natural gas still needs to seriously address flaring and methane leaks that tarnish its image as the cleanest of fossil fuels.

The rise of renewables

Renewable energy in power grows quickly in all three scenarios (Figure 5), driven by wind and solar power, aided by falling costs of production and policies encouraging a shift to lower-carbon energy sources. 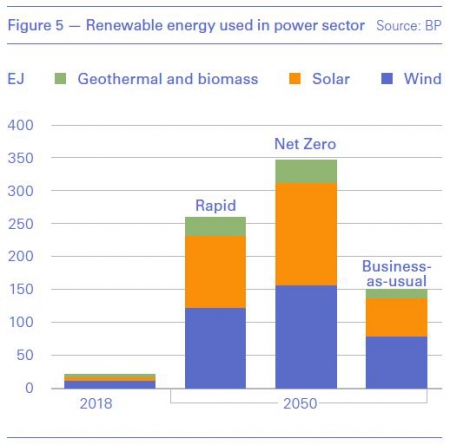 Emerging economies account for the majority of the growth in renewable energy in each of the three scenarios, driven by stronger growth in power generation and by the increasing share of renewables in power. Coal is seen as the major loser. 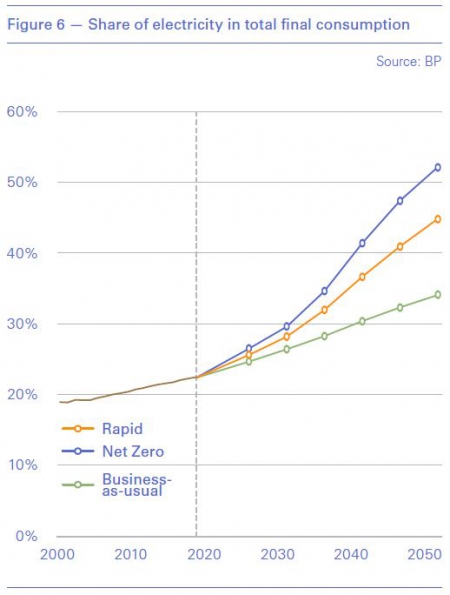 The world continues to electrify (Figure 6), leading the power sector to play an increasingly central role in the global energy system.

The extent to which the energy system electrifies is greatest in Rapid and Net Zero as progressive decarbonisation means more electricity at the point of consumtion. It increases from a little over a fifth in 2018 to 45% in Rapid by 2050 and over 50% in Net Zero, compared with just 34% in BAU. The growth of electricity demand in BAU is supported by stronger overall growth in energy consumption than in the other two scenarios.

The energy required to meet the growing use of electricity for final consumption is the dominant source of incremental demand for primary energy in all three scenarios. As a result, the share of primary energy that is absorbed by the power sector increases from 43% in 2018 to around 60% by 2050 in Rapid and Net Zero and to a little over 50% in BAU.

The fall in emissions in Rapid and Net Zero is driven by switching to low-carbon energy, greater gains in energy efficiency, and growing use of carbon capture technologies (CCUS). 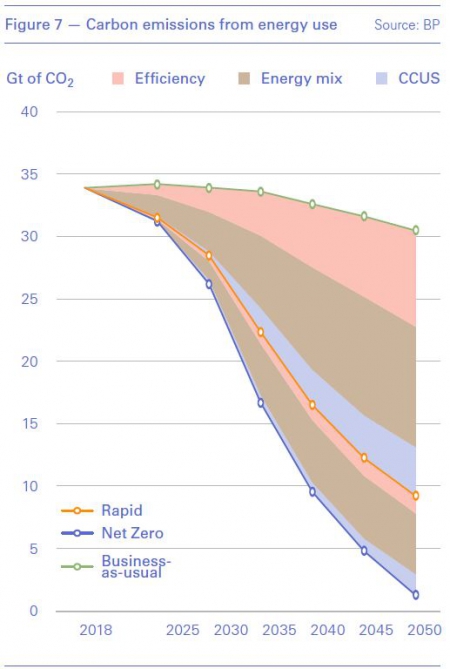 EO 2020 acknowledges that there may be economic and political limits to the extent to ‎which an accelerated energy transition can be driven solely by government policies. It assumes ‎that the impact of these polices will be augmented by the changing behaviour and preferences of ‎companies and consumers in switching to low carbon energy sources. But is such assumption valid globally?

One of the biggest challenges is the dichotomy that is developing between consumers’ climate perceptions in the developed economies and countries in Asia, particularly in China and India. In a recent survey close to 75% of respondents in China agreed with the statement: “The effects of climate change are too far in the future to worry me,” with barely 6% disagreeing. The numbers for India were about 65% and 25% respectively (Figure 8). Globally opinion was split. Clearly, while consumers in the richer developed world may be willing and afford the cost of making climate change a high priority, the same does not apply to Asia.

Fast-growing economies and increasing populations mean that Asia’s energy needs cannot be provided by renewables alone, but will also need gas, coal and nuclear. Between them, China and India account for about 28% of global energy demand, expected to grow to about 33% by 2050 in all scenarios – by then Asia’s share will grow to about 43%. In addition, about 75% of the growth in energy demand between now and 2050 will come from Asia.

Combined with the economic impact of Covid-19 and security of supplies concerns, both China and India are prioritising domestic energy resources, including renewables but also coal. Should climate change – in contrast to clean air which continues to be high priority – continue to play second fiddle to security of supplies and economy concerns in these countries, and in Asia in general, the likelihood of Rapid and Net Zero scenarios materialising will be small. Then there is the question of the November US presidential elections and the incumbent’s views on the environmental question.

It is often stated that effective transition to clean energy will need decisive policy measures, including substantial increases in carbon prices. But apart from Europe, such policies may be difficult to implement anywhere else, possibly impacting the extent and effectiveness of transition. 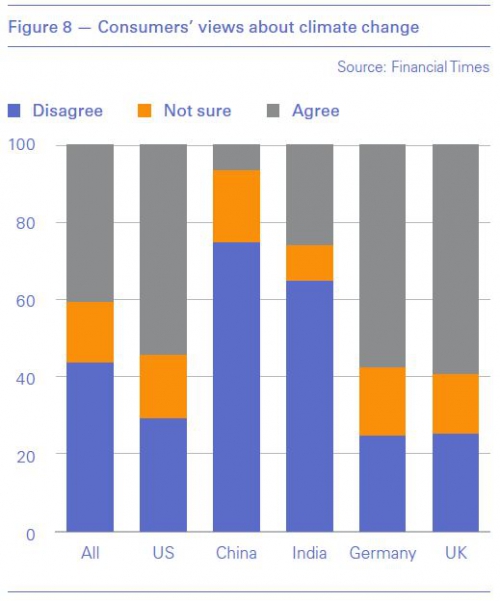 In addition, apart from European majors, US majors and National Oil Companies (NOCs) are mostly carrying on, more or less, ‘as usual’. Under such circumstances, future growth in oil demand may not yet be over.

The challenge then for BP is to convince its investors that cutting oil production by 40% and increasing its renewables spending by a factor of ten in the period to 2030 will work. Presenting this, Looney said “Our new strategy is going to transform BP into a very different company. Not overnight, given our size and scale. But fast, because the world needs change.”

Undoubtedly renewables will be the fastest growing energy source. But, depending on what happens in Asia, demand for fossil fuels is expected to remain strong for some time – likely somewhere between BAU and Rapid estimates. Even Looney said that no matter what trajectory a transition to cleaner fuels takes, “hydrocarbons do continue to play a role” in the future. He added: “In 2030, BP will still be a major producer of hydrocarbons.”

As the world goes forward, energy may be dominated by renewables and gas. But Asia’s growing energy needs mean that other sources of energy will still have a serious role to play during the next few decades.