Several high-profile financiers of emerging markets infrastructure, such as the UK government, are actively considering a blanket ban on fossil fuels that would preclude any new projects involving natural gas. Burning natural gas emits carbon dioxide (CO2), a long-lived greenhouse gas. Facilities that produce, transport and consume natural gas sometimes leak methane, a short-lived but even more potent greenhouse gas. So blocking money for new gas pipelines, gas-fired power plants, or gas-consuming industries in Africa might seem like good environmental policy, especially as we seek to accelerate the global transition to a cleaner energy future in the wake of COVID-19. But it’s not.

A prohibition on funding for gas-fuelled power in Africa won’t work for climate mitigation — and it will hurt the continent’s development. Worse, because gas has a pivotal role to play in Africa’s transition to clean energy, a ban now could slow the adoption of renewables and reinforce a global energy double standard.

Here are a dozen reasons why gas should have a bright future in Africa.

1. Banning gas in Africa won’t be effective in fighting climate change. The continent is starting from such a low energy use and emissions base that there are few gains from squeezing out gas. Here’s how low: if all of Sub-Saharan Africa tripled its electricity consumption overnight using only natural gas, the additional CO2 would be equivalent to just 1% of global emissions.

2. The continent’s energy needs are enormous and urgent. Electricity demand may be plateauing in the US and Western Europe. But in Africa, rising incomes, growing populations and rapid urbanization will combine to push electricity demand to at least double (or possibly triple or more) by 2040. Barring financing for all fossil fuels would have the very concrete effect of slowing poverty reduction, raising energy costs on the most vulnerable people, and suppressing incomes and job creation.

3. Climate resilience requires more energy, not less. Ruling out gas would hamstring African countries as they try to adapt to the major impacts of climate change like droughts, floods and soaring temperatures. Gas is particularly well-suited to energy-intensive adaptation technologies, such as steel and concrete for resilient infrastructure, desalination for expanded freshwater supply, and cold storage and air conditioning.

4. Gas-fired power plants are modular and inexpensive. Coal, geothermal, nuclear and hydro power stations all incur huge upfront capital investments. By contrast, gas turbines are cheap and modular, which helps them sidestep the huge cost overruns that plague large coal-fired power projects. And they are less polluting than the default modular energy source in emerging markets – the diesel generator.

5. Gas is an ideal fuel for industry. Natural gas is not just for electricity; it's also a valuable feedstock for making fertilizer or other petrochemicals and an efficient source of process heat for high-energy industries like cement or steel production. For African countries with industrial ambitions (that is, all of them), gas will be an indispensable input. 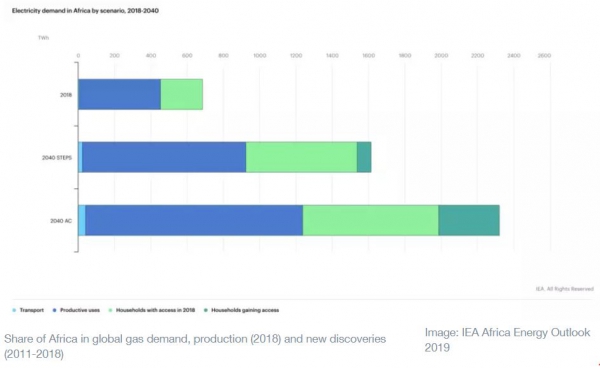 6. The continent has plentiful gas. Nigeria, Mozambique, Ghana, Senegal and many more countries have their own significant natural gas resources that they are already developing, often in partnership with US and European companies. Asking these countries to leave this resource in the ground and forego income, or to export all their gas to richer regions, seems indefensible, especially given that...

7. Higher income countries are expanding their use of gas. Gas accounted for nearly half of the global increase in energy demand in 2018. The United States, China, and large parts of Asia and Europe are all betting heavily on gas as a core component of their energy futures, with important volumes sourced from Africa as liquefied natural gas (LNG). Indeed, French energy giant Total has just inked the financing for a $20 billion LNG project in Mozambique. Closing off gas consumption to African countries just because they are late adopters with more limited financing options for building out domestic gas infrastructure is a politically and ethically fraught stance. As a senior African policy-maker once told us: “We will be aggressive in promoting the energy transition, but we cannot accept climate colonialism.”

8. Intermittent renewables are essential, but they can’t (yet) do it all. Wind and solar have become much more competitive due to steep price reductions. However, African countries that are rapidly increasing renewable capacity are facing challenges managing intermittency. Kenya, for example, is already suffering from severe voltage instability at only about 15% of installed capacity from wind and solar. With currently available storage technologies, it is impossible for African countries to greatly expand power supply without complementary new investments in gas or other dependable backups.

9. Gas pairs especially well with wind and solar as a technology and a financial model. Gas turbines can start and stop quickly to balance renewable sources affected by local weather variability. Also, the low-fixed-cost/high-variable-cost character of gas-fired power means that – unlike coal, hydro, nuclear or geothermal – it can remain financially viable even when wind and solar are meeting energy demand much of the time.

10. Gas doesn’t cause significant outdoor air pollution. The most immediately visible environmental and health problem in emerging market cities is outdoor air pollution, which causes around 3 million premature deaths a year. Natural gas is second to coal in the share of electricity it generates worldwide, but unlike coal, gas burns cleanly and makes a negligible contribution to air pollution. In Africa, piped gas or imported LNG could keep coal out of the future energy supply while displacing existing dirty generators that run on diesel or fuel oil. In countries that produce oil, a functional local gas market would also reduce environmentally harmful gas flaring.

12. Innovation can position gas to support a future zero-carbon energy system. Methane leaks are starting to be monitored by satellite, potentially addressing a serious environmental concern about gas. Over the longer term, pipelines and storage facilities needed for gas utilization today could allow future excess energy from off-peak wind and solar to be stored as “renewable gas” for later use. Emerging technologies for carbon capture and storage (CCS) might also allow gas-fired power plants to operate with a low or zero carbon footprint.

Given the seriousness of climate change, “Ban all fossil fuels, everywhere” is an intuitively appealing position. When applied to energy-deprived regions like Africa, however, ruling out natural gas will do far more harm than good on environmental, health, and development fronts. In the process, it will convince policy-makers on the continent, perhaps not for the first time, that outside investors do not have their best interests at heart.

Reform Is in the Pipelines: PipeChina and the Restructuring of China’s Natural Gas Market [GGP]