TurkStream: Who profits, who loses out? [GGP]

Erdogan told reporters TurkStream would be ready to operate in 2019 after tests are carried out, while Putin said the pipeline would make Turkey a "major European hub." The tie-up with Moscow would "without a doubt influence the geopolitical standing of the Turkish Republic."

The new energy cooperation comes despite Moscow severing ties with Ankara three years ago after a Turkish fighter jet shot down a Russian warplane on the Syrian border. 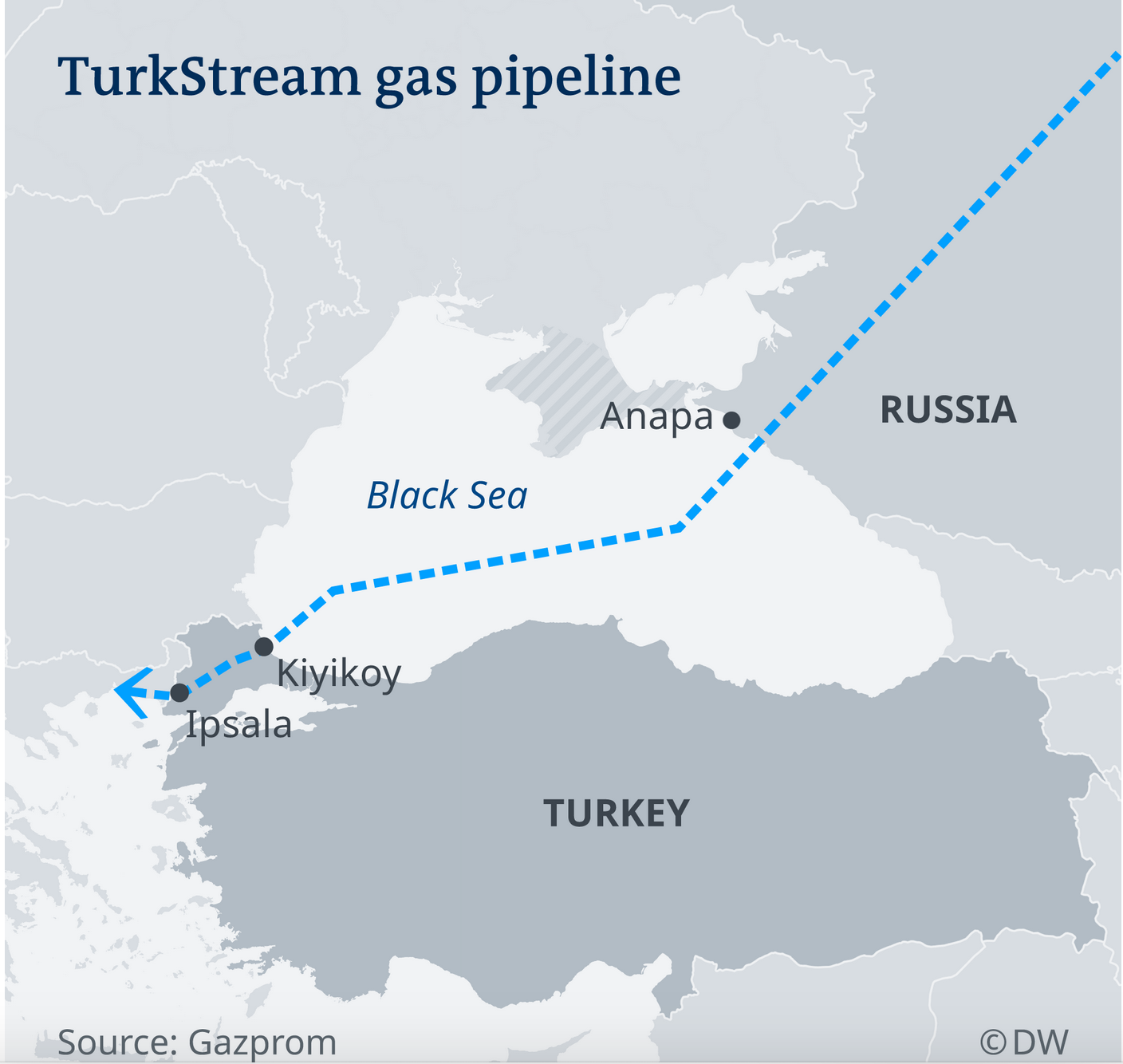 TurkStream is a 910-kilometer-long (570 mile) gas pipeline running under the Black Sea, linking Russia and Turkey. Together, the twin pipes will have a maximum capacity of 31.5 billion cubic meters (1.1 trillion cubic feet) of natural gas per annum.

The first section will supply the Turkish market; the second will provide southern Europe with Russian gas.

When it opens at the end of 2019, the pipeline will allow Russian energy giant Gazprom to service Turkey, its second biggest client nation after Germany/

Why is it needed?

Turkey relies heavily on imported gas from Russia, Azerbaijan and Iran, as its domestic production meets just 2 percent of its needs. At present, the Blue Stream pipeline carries most of Turkey's gas from Russia, and another aging pipeline brings the remainder through Ukraine and Eastern Europe.

The imported gas helps meet almost half of Turkey electricity generation requirements and nearly a third of its overall primary energy consumption. Turkey is the only European country to have seen strong growth in gas demand since the end of the 2008/9 financial crisis. Last year, its annual natural gas consumption reached a historic record high of 53.5 billion cubic meters, a 20 percent increase on the previous year, according to the Turkish energy watchdog.

Turkey is the second largest customer of Russian gas after Germany, and most analysts predict demand will continue to grow rapidly.
Putin and Erdogan (Reuters/M. Sezer)

Who profits from TurkStream?

Obviously, Gazprom will be able to meet the increased demand for gas from Turkey. Last year, more than a million new Turkish customers signed on to use gas.

TurkStream will also help Turkey achieve its objective of becoming a major gas 'bridge' between East and West. Already a key regional energy hub, Turkey will be able to offer to supply gas to the rest of southeastern Europe, earning billions of euros in the process.

Why is TurkStream so controversial?

European Union countries remain heavily dependent on Russian gas, most of which until recently ran along pipelines through Ukraine. In the 2000s, Russia cut off winter gas supplies to Ukraine, and therefore must of the rest of Europe, in a row over unpaid debts. Russia's annexation of the Ukrainian region of Crimea, and Moscow's backing for separatists in eastern Ukraine, also brought relations between the two neighbors to a new low.

TurkStream, along with Nord Stream, another Russian pipeline that runs under the Baltic Sea to Germany, will allow Russia to route more of its gas to Europe without running through Ukraine. The Kiev government is expected to lose billions of euros in transit fees as a result.

Despite EU attempts to scupper it, Russia is also building a second pipeline, Nord Stream 2.

Other Eastern European countries have also accused Moscow of trying to exert political influence by by passing them.

Russia also plans to extend TurkStream through Bulgaria and Serbia to Greece and Italy. Construction work on the second overland section is expected to start in 2019.

Natural Gas Pragmatism Is The Fastest Route To Decarbonization

Upstream spending will struggle to recover to pre-pandemic levels