The Impact of COVID-19 on Gas Demand and LNG Exports in the U.S. [GGP]

At the end of May 10, 2020, there were around 4.1 million reported cases and more than 280,000 COVID related deaths globally. The epicentre of the virus shifted from China to Europe (Italy, Spain, France and Germany) and now to the U.S.

The U.S., which is the world’s third populated country, has seen its cases grown exponentially from mid-March 2020 to around 1.35 million cases by May 10, 2020. The country currently accounts for around 33% of the global COVID-19 cases and 28% of global COVID related deaths. Similar to many countries across the globe, the U.S. has taken lockdown and social distancing measures, shut non-essential businesses and restricted movement across its borders to curb the spread of the infectious virus. These measures have negatively affected energy demand and economic growth due to the closure of schools, businesses, industrial plants and lower transportation activity.

The U.S. is by far the largest natural gas consumer globally with gas playing a significant role in the U.S. primary energy mix, accounting for more than 31%. As such, the negative impact of COVID-19 on energy demand is expected to drag gas demand downwards in the country. During the first four months of 2020, gas consumption has fallen across all major sectors, except the power sector, in comparison to 2019 (see Figure 1). 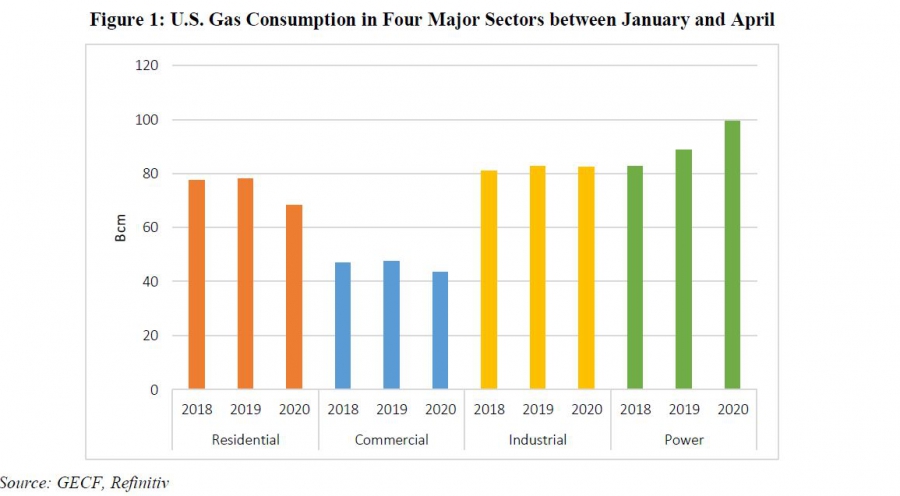 The residential sector recorded the largest drop in consumption, declining by 12.4% y-o-y, followed by the commercial (-8.8%) and the industrial (-0.1%) sectors. In contrast, gas consumption for power jumped by 12.3% y-o-y. Although the COVID-19 lockdown measures may have contributed to the decline in gas consumption, a relatively mild 2019/2020 season in the U.S. was the major driver for the drop in residential and commercial gas consumption. Between January and April 2020, the heating degree days (HDDs) fell by 11% y-o-y to 2,456, which curbed gas demand for heating.

Despite the COVID outbreak, which has dented global gas and LNG demand, U.S. LNG exports have been resilient in 2020 thus far. As shown in Figure 2, U.S. LNG exports have risen significantly in 2020 compared to 2019. During the first 19 weeks of 2020, exports surged by 99% y-o-y to 20.5 Mt, supported by the start-up and ramp-up of new LNG facilities in the country. 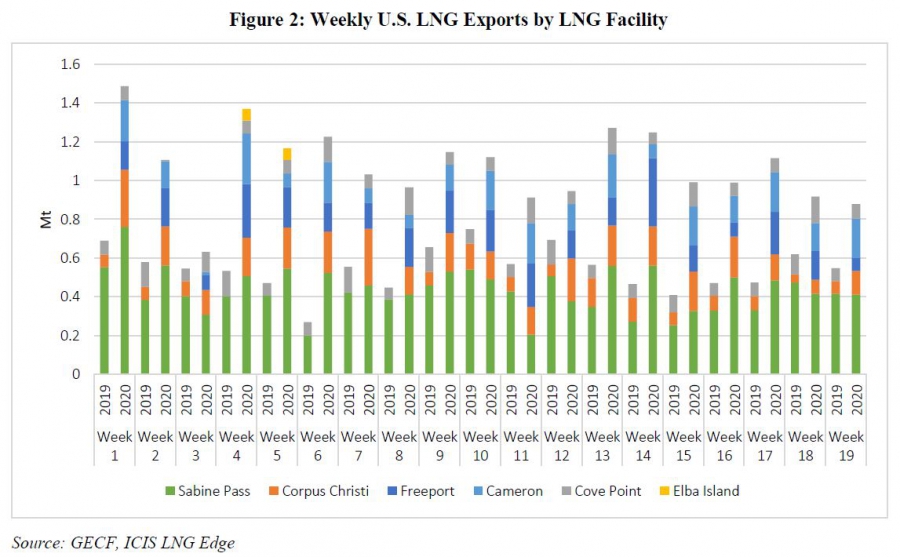 In terms of the futures gas and LNG prices, if shipping and liquefaction costs are considered as “sunk-costs”, U.S. LNG is uneconomical for delivery to Europe through October 2020, since the price spreads between Europe and the U.S. are negative during this period (see Figures 3 and 4). Although the JKM-HH price spreads are positive from July 2020 to April 2021, North East Asia may be unable to absorb the significant growth in global LNG supply in 2020, which is expected to come mainly from the U.S. Under such market conditions, off-takers of U.S. LNG are highly likely to cancel cargoes since they will have to incur further financial losses if these LNG cargoes are sold at a loss in the European market. 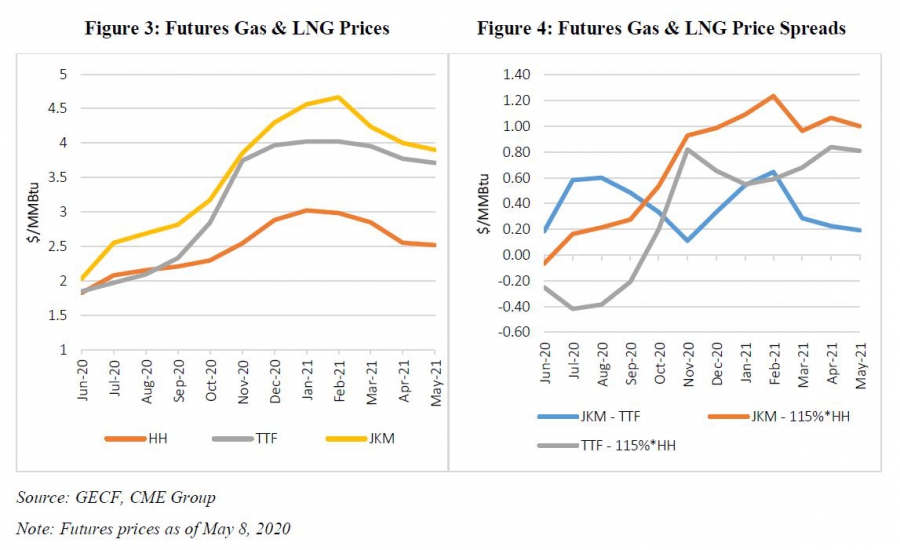 As reported in April 2020, around 20-30 U.S. LNG cargoes for loading in June 2020 were cancelled due to the weak market fundamentals. The cancelled cargoes are equivalent to between 1.4 and 2.1 Mt of LNG, which is almost half of U.S. monthly LNG exports. LNG marketers, such as Cheniere, may choose to remarket the cancelled LNG cargoes, however, the low price environment may deter this. If LNG off-takers choose to remove a similar amount of monthly cargoes between July and September 2020, around 6-8 Mt of LNG supply could disappear from the market. Under such circumstances, this would lead to shut-ins or underutilization of some U.S. LNG facilities, which could offer some support to global spot gas and LNG prices in the short-term.