The Arctic has been hailed as the future of Russia’s oil and gas industry. Companies are pushing ever further north with increasingly remote and complex exploration and production projects, to offset decline at their older fields further south.

But developing Russia’s vast Arctic oil and gas reserves is no easy undertaking. Operators have to contend with severe climate conditions. Winters can drag on for up to nine and a half months a year, with temperatures reaching as low as 55oC. At these temperatures, fuel in airplanes, trucks and car can freeze, while some metals can shatter. Wind speeds can also reach up to 32 metres/second. 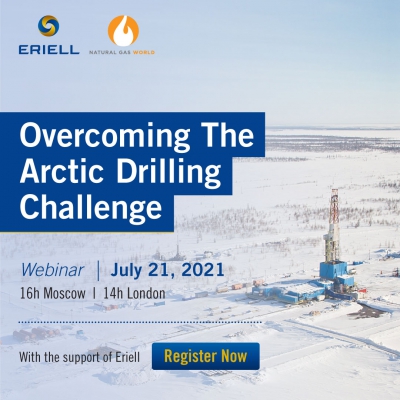 Many oil and gas developments within Russia’s Arctic circle are also found at remote locations, where infrastructure is very limited. This means that personnel and equipment must traverse long distances, either using long winter roads or the Northern Sea Route, making mobilisation a long and expensive task that can only take place during limited periods in the year.

ERIELL is a leading international oilfield services provider in this harsh environment. The company, which counts Novatek, Gazprom and Gazprom Neft as its main customers, works at a number of projects in the Russian Arctic, mainly on the northern Yamal and Gydan peninsulas. Most are natural gas-focused.

ERIELL has worked for 11 years with Novatek, Russia’s biggest LNG exporter. It has drilled more than 300 gas wells for the producer in that time, including at Arcticgas, Novatek’s joint venture with Gazprom Neft developing deep Achimov and Valanginian layers of the Urengoyskoye field. It has also worked at the Yuzhno-Tambeyskoye field which supplies the Yamal LNG export terminal, and the Utrenneye field that will underpin the Arctic LNG-2 terminal, due online in 2023.

The services provider has also sunk more than 600 oil wells for Gazprom Neft, including at some of the company’s biggest greenfield developments including the Novoportovskoye, Vostochno-Messoyakhskoye and Tazovskoye fields. It has also helped Gazprom and Germany’s Wintershall Dea extract Achimov-layer gas at Urengoyskoye through their Achim Development joint venture.

ERIELL’s years of experience have given it an edge in the gas sector. It was also among the first services providers to drill complex sub-horizontal wells into the Achimov formation, one of Western Siberia’s most challenging production horizons. The formation is found at depths of around 4,000 metres, and is characterised by thin, sandstone reservoirs that vary greatly in thickness and quality and can be subject to very high pressure and high temperature. 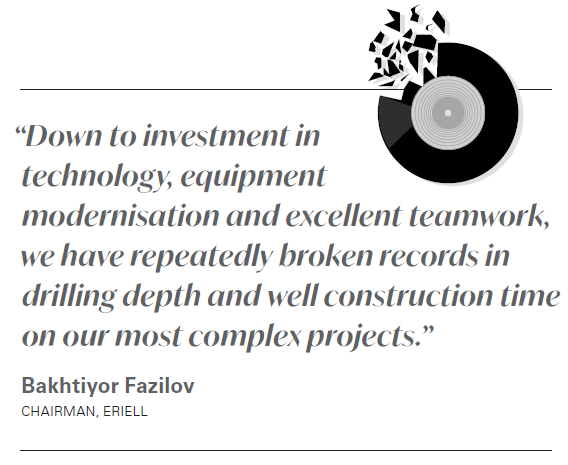 “Down to investment in technology, equipment modernisation and excellent teamwork, we have repeatedly broken records in drilling depth and well construction time on our most complex projects,” Bakhtiyor Fazilov, ERIELL’s chairman of the board, says. “We are constantly working to find new solutions and optimise processes, that allows us to provide services of equally high standards in extreme desert climates, mountainous regions and permafrost zones.”

Outside of the Russian Arctic, ERIELL also operates in Central Asia, South Asia and the Middle East.

Demonstrating its capabilities in the Arctic, ERELL was rated in first place among Novatek’s drilling contractors in 2019 and 2020. Its drilling crew was also recognised as the best at the Messoyakha fields operated by Gazprom Neft in the second half of 2020.

ERIELL has also chalked up several major accomplishments in mobilisation over the years. In 2019, it transported the Aurora drilling rig some 27,000 km from China to the Utrenneye field on the Gydan Peninsula, using four boats with icebreaker assistance as well as trucks across the ice. The journey took three months. It also mobilised a rig to Novatek’s Obsky LNG project on Gydan over 12,000 km during just over three months. The 12,000-metric ton structure was transported from Novy Urengoy to Ekaterinburg to the port of Arkhangelsk by trucks and railways, and then from Arkhangelsk to Sabetta by two boats.

Arctic drilling grows ever more complicated, as shallower reservoirs enter decline and deeper ones must be targeted. Increasingly, ERIELL is required to drill into Valanginian, Achimov and Jurassic deposits, rather than shallower and simpler-to-develop Cenomanian layers.

These deeper zones are subject to very high pressures and temperatures, and links between reservoirs can be unstable. There is also a high risk of uncontrolled gas outflows and losses. This results in a number of drilling challenges that ERIELL must overcome, including differential sticking, issues with liner running into the well and low quality of cementing. The company avoids these problems with  rotary steerable systems, the use of oil-based rather than water-based mud, logging while drilling, flexible coiled tubing, casing drilling, high-tech tools for well casing for multi-stage hydraulic fracturing, casing packers, MaxBridge technology, optimised chisels and More Productive Drilling technology.

While oil and gas activity in the Russian Arctic poses unique challenges, ERIELL is confident of the sector’s prospects. Thanks to its abundant resources, the region’s production is relatively low cost and sustainable. And Russia’s Arctic oil and gas will grow more competitive as its infrastructure becomes more developed.

There is considerable scope to expand the region’s LNG production, as noted in Russia’s national energy strategy up to 2035. Gas is the most environmentally friendly hydrocarbon fuel, and therefore these supplies can serve as a vital role in the energy transition.

Gas to remain staple in Europe even in net-zero future: study [Gas in Transition]

UK hydrogen and the route to market [Gas in Transition]