South Korea had 24 operating reactors with 23,231 MW of capacity at four sites in November 2019, according to the World Nuclear Association (WNA), with a further 5,600 MW under construction. The country produces a higher proportion of electricity from nuclear than anywhere else in North Asia, with its reactors generating 23.7% of output in 2018. The percentage increased to 28% from January to July 2019, according to the Korea Energy Statistical Information System (Kesis), as reactors closed in 2018 for maintenance and safety checks resumed operation.

The 25% year-on-year jump in nuclear output to 91.4 TWh in January-July 2019, combined with an increase in renewable output and fall in overall electricity supply, squeezed gas-fired output. Combined-cycle generation fell to 82.7 TWh from 93.2 TWh in the same seven-month period of 2018, according to the Korea Energy Economics Institute (KEEI). 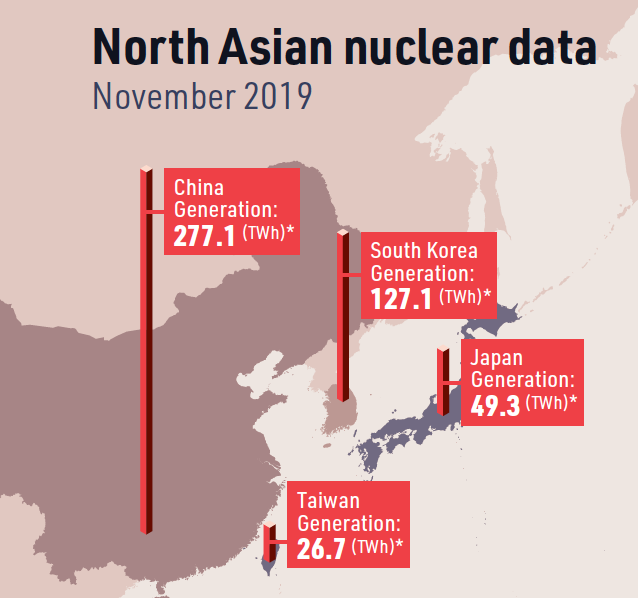 As a result, LNG use for power generation fell to 9.62 million mt (13bn m3) in January-July 2019 from 10.95 million mt in the same period of 2018. This in turn accounted for much of the decline in total LNG imports during the seven-month period, with arrivals falling by about 10% year on year to 22.93 million mt.

This is at odds with the May 2017 change in South Korean energy policy. President Moon Jae-in committed to the gradual phasing out of nuclear power and its replacement with renewable energy, with LNG seen as the key bridging fuel.

However, gradual is the operative word, with the phase-out yet to begin. In fact, the reverse is happening. In mid-2019, the 1,400 MW Shin Kori-4 reactor entered operation. A further four units with 5,600 MW of capacity are under construction for scheduled operation by 2024. The first of these, the 1,400MW Shin Hanul-1 reactor, could begin operating in 2020.

The difficult near-term outlook this implies for gas is apparent from KEEI’s Mid-Term Energy Outlook, issued in October 2019.

How much LNG is actually used in South Korea will depend on factors other than nuclear output, not least how quickly the country’s stuttering economy recovers; whether renewable capacity can rise five-fold to 58.5 GW by 2030; and whether government support for coal-fired generation will succumb to fierce environmental opposition. 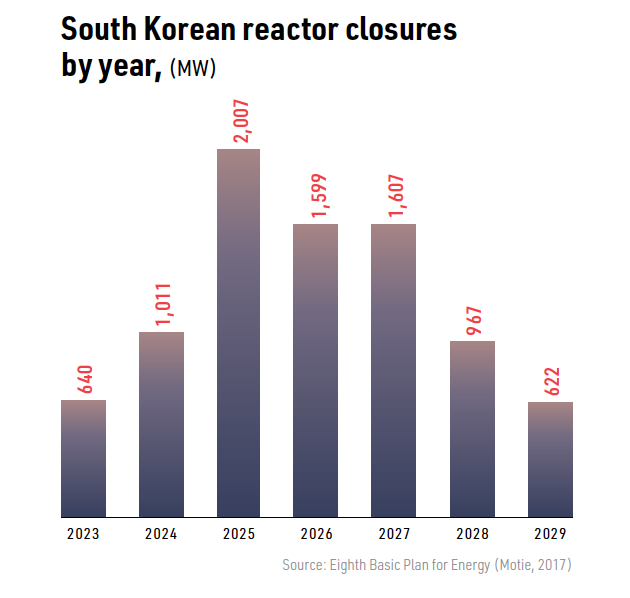 But the LNG surge in 2018 and slump in 2019 show that nuclear developments have a key impact on South Korean LNG use. At present, the projected impact is very much on the down side, but this could quickly change, if the reactor construction programme suffers extended delays or the nuclear industry is affected by incident or scandal as it has been in the past.

The inverse relationship between nuclear output and LNG use is less close in Japan than South Korea, but still significant. This was apparent in 2018 when four reactors resumed operation and the suspension of another – Ikata-3 -- was reversed. This contributed to a 1% on-year fall in LNG imports to 82.85 million mt, according to ministry of finance data.

A nuclear renaissance thus seemed under way. The Strategic Energy Plan approved in July 2018 envisaged that gas use in 2030 would be squeezed by a 20-22% minimum share for nuclear, as well as a 22-24% share for renewables and energy efficiency measures. 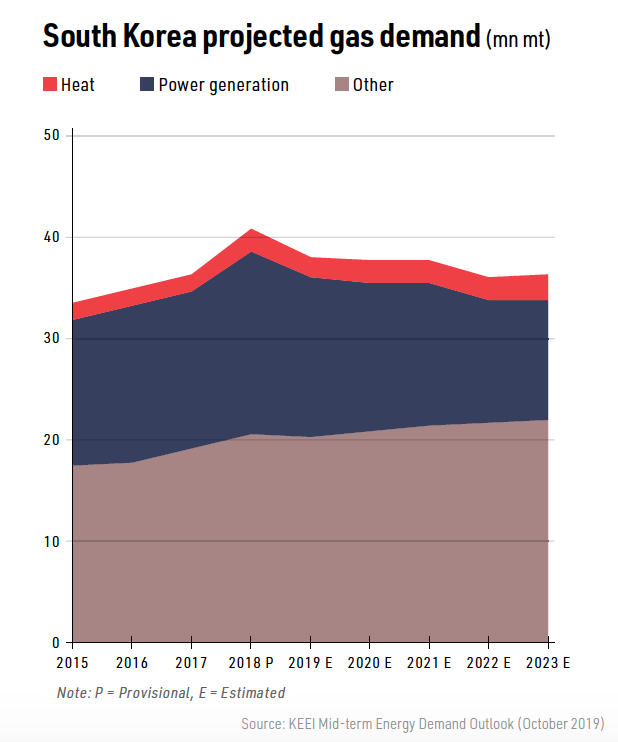 However, 2019 saw little activity, with no reactor restarts occurring. The restart of three units with 2,340 MW of capacity is proposed in 2020, but by no means certain.

The restart programme has been delayed not only by local opposition, but also by increasingly stringent regulatory and technical requirements. Notably, in April 2019, new conditions were attached to the implementation of anti-terrorism measures at reactors. This could lead to the temporary closure of some or all of the nine operating reactors in 2020.

This potentially would boost LNG use. In October, Kyushu Electric said its 846 MW Sendai-1 and Sendai-2 reactors could both be offline for eight to nine months in 2020-21, while work is done to meet the new anti-terrorism requirements.

Conversely, reactor restarts could eat into LNG’s share of the generation market in the course of the 2020s, but there are few indications that there will be a significant uptick in the pace of reactor restarts, or that all idled reactors will restart, meaning the government’s target of a 20-22% nuclear share by 2030 will be hard to achieve. Increased nuclear generation in any case tends to displace oil-fired generation before gas. 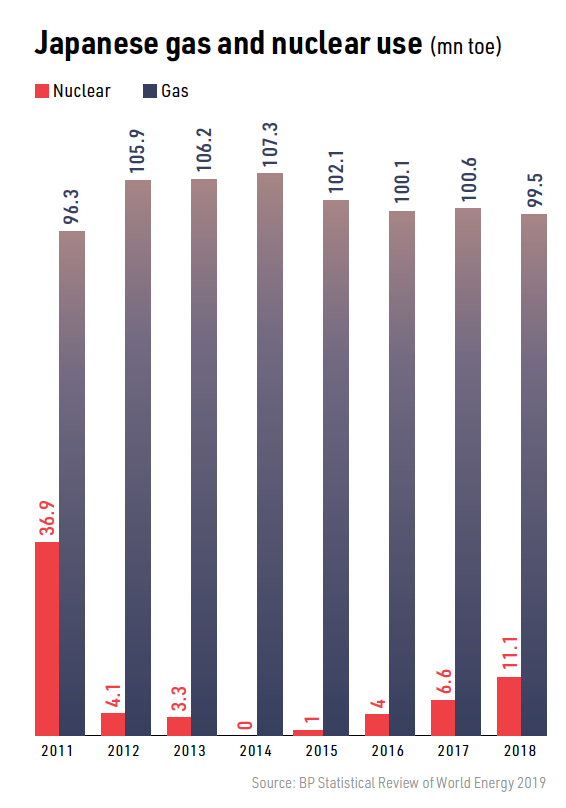 China is the region’s dominant nuclear generator, with output reaching 277.1 TWh in 2018. According to the WNA, it hosted 47 operational reactors with 45.7 GW of capacity in November 2019. China also accounts for a significant proportion of the regional and global stock of reactors under construction or planned.

Most operating Chinese capacity was commissioned relatively recently, with eight reactors with 10 GW joining the grid between June 2018 and June 2019 alone. Average reactor age is low at about seven years.

However, for all its success in implementing a large number of nuclear projects at a relatively fast pace, China will almost certainly miss its 2020 target of 58 GW. The 2030 targets of 120-150 GW and 8-10% of total electricity output also appear very ambitious.

This is because the pipeline of projects under construction has dwindled. The start of work on Zhangzhou-1 in October 2019 was China’s first construction start since December 2016. In November 2019, twelve reactors with 11,155MW of capacity were under construction, down from 20 in 2017.

However, this does not necessarily represent an opportunity for LNG.

Such is the scale of China’s generating sector that its reactors accounted for little more than 4% of total electricity output in 2018, even though their output increased by almost 20% year on year. The nuclear sector’s performance had no discernible impact on the country’s gas-fired generation plants, whose output grew by 10.3% to 223.6 TWh in 2018. 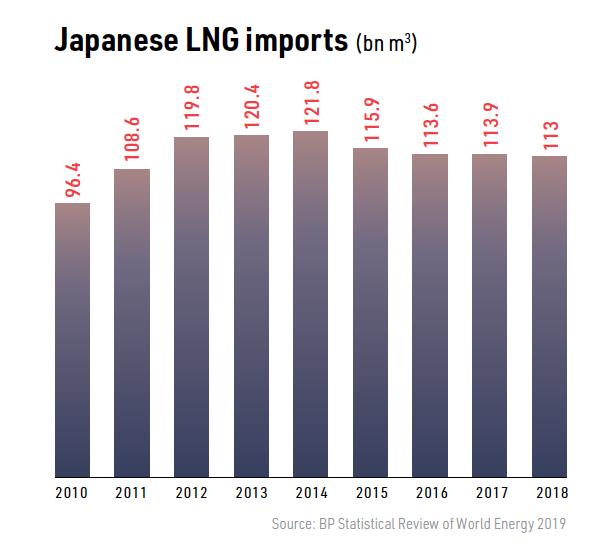 While gas-fired and nuclear plants do compete for investment funds and grid access at local level, their prospects are not intrinsically linked in the same way as other regional jurisdictions. Indeed, the key source of competition for both is renewable capacity, because of plummeting wind and solar capital and generating costs. China may be one of the key markets for LNG, but its requirements appear unlikely to be profoundly influenced by nuclear developments.

Taiwan hosts four operating reactors with 3,842 MW of capacity at Kuosheng and Maanshan, according to the International Atomic Energy Agency. Nuclear output of 26.7 TWh in 2018 accounted for 11.4% of total generation. 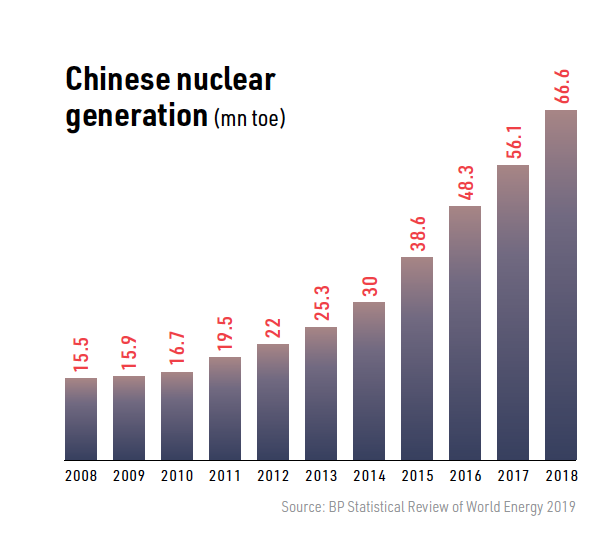 Government policy is to close all reactors by 2025, although a November 2018 referendum sought to repeal legislation requiring a ‘nuclear-free homeland’ by 2025. This led pro-nuclear groups to demand existing reactors operate beyond 2025 and construction resume on the 2,700 MW nuclear plant at Lungmen, work on which was suspended in 2015. 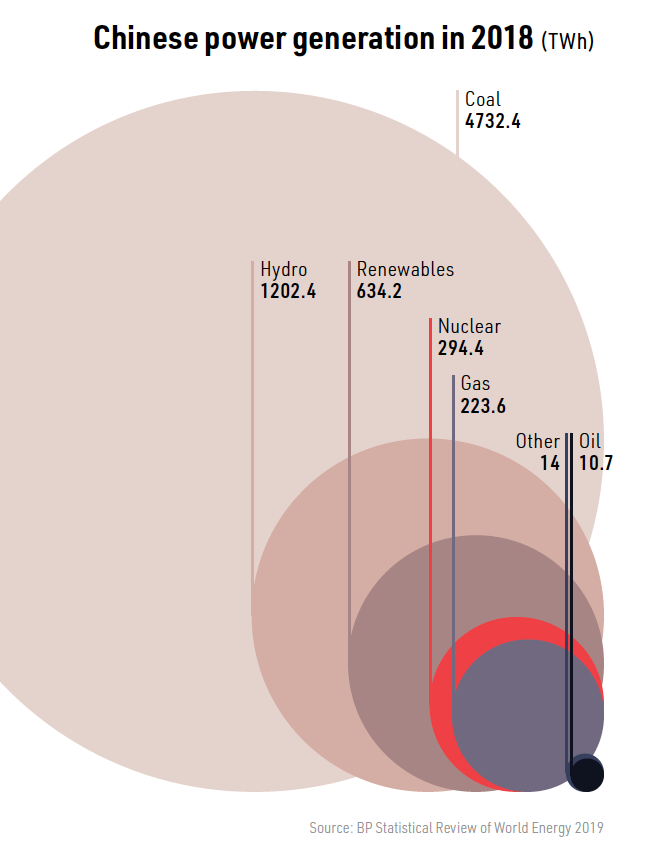 Lungmen would be unlikely to start operating until the 2030s, given that state utility Taipower has said it would take six to seven years to resolve issues relating to reactivation of the project before construction could even start. However, if the opposition KMT took office some existing reactors might continue operating beyond 2025.

This would affect gas-fired generation, which the government projects will produce 50% of electricity -- or about 157 TWh -- in 2025. While licensing and waste disposal issues could constrain output, nuclear might thus reduce gas-fired generation by 15-30 TWh/year, trimming projected power generation gas use of 22.1mn mt in 2025 by some 2.2-4.4mn mt.