This is a clear win for Poland, Latvia and Lithuania against the EU Commission and Germany as the court recognised that the 2016 decision was taken without regard for the solidarity principle. The court applied Article 194 of the Treaty on the Functioning of the European Union in a much broader way than EU energy directives that rely on a solidarity mechanism only for extraordinary situations.

From today, Nord Stream 1 will be capped at 84% load factor…

The two onshore pipes from Nord Stream 1 are NEL (going west from Greifswald, to the Netherlands) with a capacity of 62mn m³/d) and Opal (going south, with now 65mn m³/d allowed out of the 100mn m³/d total capacity). This means that Nord Stream 1 is now restricted once more to 127mn m³/d out of a total 151mn m³/d or 84% of the annual nameplate.

The transport operator Opal Gastransport[1] has so far not reduced the capacity available to Gazprom but September 13, the German federal network agency (BNA) finally ordered the operator of Opal and Gazprom to implement this EU court decision or face fines.…

I wrote just after the 2016 EC exemption that “the Opal decision also raises the question of continued EU support for Ukraine, even as the latter continues to fight both militarily and politically with Russia.”[2] This court decision reinforces Ukraine/Naftogaz bargaining position ahead of the expiry of the transit contract December 31.

With Nord Stream 2 late (and with possibly even more issues ahead), Gazprom will still need some transit capacity in Ukraine. But with no trust and the arbitration attrition taking place between those two countries, it remains nearly impossible to believe a long-term transit agreement is feasible. But if no-one appeals the court decision, Gazprom might be interested in signing an interconnection agreement with Naftogaz before the end of the year. This would allow Gazprom to nominate day ahead volumes for transit via Ukraine from January 1, 2020.

Russian gas would therefore continue to flow in Q1 20 avoiding an energy crisis that would be very detrimental to the image of gas as the new EU Commission designs its Green Deal. And after a few weeks of day-ahead nominations, both parties could come back to the negotiating table and sign a medium-term deal (that would then avoid the multiple arbitrations).

…And should set a precedent applying the solidarity principle more broadly

This new court decision not only means that 16% of Nord Stream 1 cannot be used: it also opens up the 'Pandora’s box' of solidarity. I’ve been the only analyst voicing concerns not only about Nord Stream 2 and Gazprom per se but on the new solidarity risk that Germany was forcing its neighbours to carry.

Germany[3] saw the biggest year-on-year increase in Russian gas supply from 2017, with an added 5bn m³, or 9.5% up in 2018, making it 61% dependent on Gazprom (compared with a 35% average for the EU-28). It is interesting to mention that “due to data privacy regulations” the German federal authority BAFA stopped publishing gas import volumes by country in 2016. 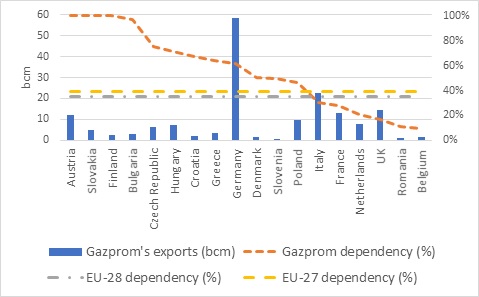 Beside the unacceptably poor German regulator not being willing to disclose essential data, the real issue is about the EU solidarity mechanism.

With Germany being so reliant on Russia, should other member states, in the event of a gas supply disruption, reduce their industrial gas demand in order to keep German households warm? Is it acceptable that Germany, the wealthiest state in the EU, should rely on others to bear the cost of supply diversification to provide its security of supply?

Germany is not contributing its fair share. The court explicitly mentioned this in its ruling:“in the context of energy policy, this implies, in particular, obligations of mutual assistance in the event that, following, for example, natural disasters or acts of terrorism, a member state is found to be in a critical situation or in a state of emergency, with regard to its gas supply.

“However, contrary to the EC's assertion, the principle of energy solidarity cannot be limited to such extraordinary situations, which fall exclusively within the competence of the Union legislature – competence which is applied in secondary legislation by the adoption of Regulation (EU) 2017/1938 of the European Parliament and of the Council of 25 October 2017 on measures to safeguard the security of natural gas supply.”

So, if the next EU Commission does not dare to take legal action against Germany, Poland knows that the EU Court is open!

[1] The joint venture between Wintershall and Gazprom owns 80% of Opal and Uniper (formerly E.ON) the other 20%.